Oct 6,2013 Leave a comment eCommerce, How to Start, Startups 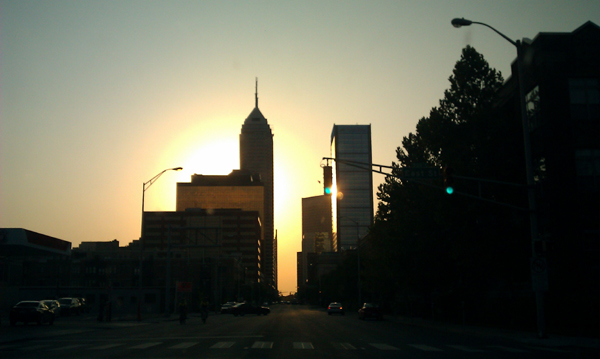 In 2010, instead of starting a normal job after college like everyone else, Luke Geddie decided to take a year off and travel around the world. It was, “an adventure that would open their eyes to the rare beauty hidden in Southeast Asia.” Luke’s brother Matt accompanied him on parts of this trip and, “with their hearts set on exploration, Luke and Matt Geddie ventured through Cambodia, Laos, Thailand, India, and Vietnam with a desire to see and experience everything.” It was Luke’s time in Vietnam when he met Kim Vo, a local celebrity who introduced Luke to many different people, government officials, and business owners in Vietnam. Through these introductions Luke started to get a sense for the value he could provide the local Vietnamese economy by using the business skills he learned while in college and his connections back in the United States.

On August 1, 2011 I left my day job at First Merchants and went full time consulting. 2 days later Luke’s mom, Joy, called to have me come over and help Luke’s brother’s computer ready for school. Luke had just got home from Vietnam after traveling abroad for a year and Joy wanted me to talk to him about some of the things I had been working on because she knew we were both entrepreneurial-minded. The three of us ended up going out to breakfast on August 18 and that’s when I told Luke about what I was doing with affiliate marketing. Luke started telling me about the ideas he had to have art created in Vietnam, which lead to the first business idea of “art catchers”. This eventually lead to the name of “Catchrs” and after the domain Catchrs was purchased on September 9, 2011 the first official Catchrs meeting was held on September 16. 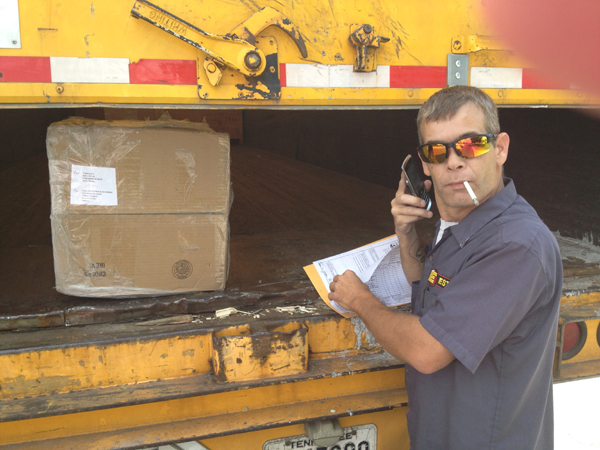 The business idea went through several iterations, eventually becoming an import/export business. Luke continued working on the business in the United States where he incorporated Catchrs, LLC through the fall, but in December of 2011 he went back to Vietnam to build the business with his partner, Kim. Matt began going to school in New Zealand where he helped Luke and Catchrs by contacting manufacturers and shipping companies around the world. In May of 2012 I helped Luke launch the Catchrs website while simultaneously beginning to work full-time at his mother’s husband’s dentist office. It was during this time that I developed my relationship with Luke’s mother, Joy. After working with her husband’s business for 9 months, Joy and I decided to begin meeting regularly in February to see if there was any businesses we could start together.

I had been learning more about e-commerce as a business as far back as November of 2012 when I began looking into drop-shipping and various e-commerce platforms. This is when I first got introduced to Andrew Youderian at eCommerceFuel.com. At the same time I had just started reading Hacker News and was learning more about programming and startups. In February I started working on a software project called Seektivity, but I quickly hit a hard wall in my software skills. I had also just started a new, stressful job that didn’t leave much time for anything else. However, this didn’t stop me from researching ideas at night while lying in bed. It was during one of these nights that I did a Google search for “where to buy…” and noticed that the second to top auto-complete said, “where to buy coconut oil”.

On March 17, 2013 I reached out to Luke about the rise of 3D printing and on April 2 he asked to have a phone conversation about “traditional medicine and online marketing it in the USA”. On April 4 we had the phone call where we talked about all of the things he had to sell. One of those things was coconut oil. I wrote Luke on April 6, “I’m interested in that because Joy, Suzanne, and my friend, Jason’s wife, Krista, all use coconut oil for cooking and as a lotion. I’d be willing to pay you for a sample to send over so I can have them try it out. I own a website called topical-cream.com and the domain tropical-cream is currently available. I’m thinking that with a ‘cute’ enough package that this stuff could sell well in local boutiques, Fresh Market stores, Whole Foods, and on Amazon.” On April 6th, Luke offered a sample. By May 22 I still hadn’t received the sample so I emailed Luke an image of the Google Trend line for coconut oil. 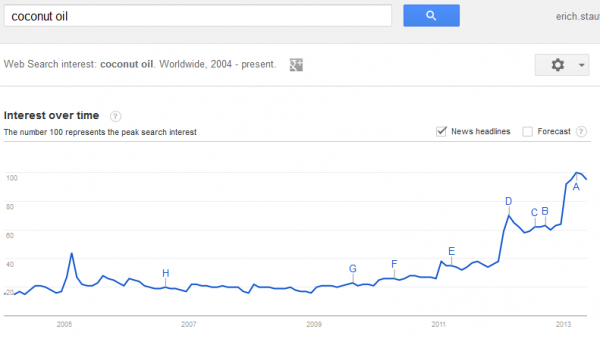 On May 27 he had the supplier re-send the sample of coconut oil. The original bottle had been mistakenly sent to Luke’s brother, Matt, in California, who would later become much more involved. On May 31 it was shipped from Canada and on June 5 it arrived at my house and by June 8 I had already met with Luke’s mom, Joy about it and had started to reach out to Matt who was still in California. Matt had experience launching his own product and was currently working as a marketing director. I saw him as an integral part of this process.

On June 9 Luke returned to the United States along with Kim, his business partner from Vietnam. On June 11 we had our first meeting about coconut oil as a business and decided to call it “Premier Grove”. On Friday, June 14 we had our second meeting about the business. By July 3 we had a business plan for the company that had been renamed to “Skinny and Co” and who’s first product was named “Skinny Coconut Oil” after the tall and skinny shape of the original bottle. On July 12 we had our EIN for the corporation and could finally start setting up Shopify, Amazon, and Opensky.

On July 9 Matt moved back to Indiana from California and we had our first meeting with Chris Murphy, a boyhood friend of Matt’s who had just graduated from college with a Marketing degree. His mom was best friends with Matt’s mother, Joy. Chris was all about “community” (he even loved the Community, the show). On July 10 Kim visited the United States from Vietnam and we all decided to offer Chris a position with Skinny and Co. He began working on the label design right away and by August 19 we had our first prototype. 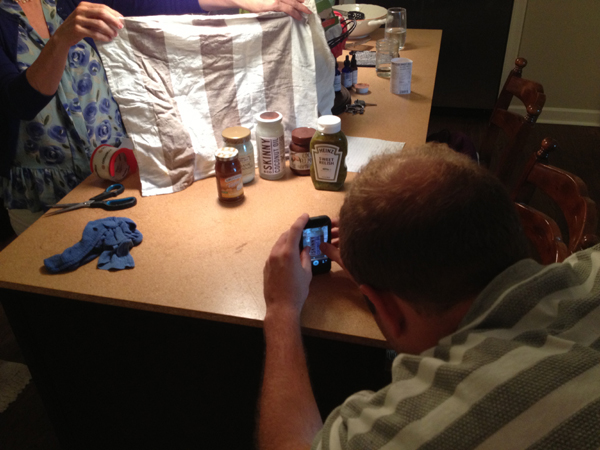 After incorporating Skinny and Co. with the state of Indiana in July, the Skinny Coconut Oil website officially launched on August 26 and had its first sale on August 31. Although Luke had offered, I had no equity in either Catchrs, LLC or Skinny and Co. and I had only been paid for the web design work I did for Catchrs. My agreement with Skinny and Co. at that time was to get a percentage of online sales in exchange for my work building out the website’s content, doing SEO, and helping with social media.

On September 3 we began working on our first brochure, an Oil Pulling Guide, and on September 26, Joy went to her printer to have flyers printed for the upcoming Gluten Free Living festival on October 5th. The printer kept staring at the flyer. She began asking questions about the coconut oil and shared how she sold raw chocolate and was looking for a coconut oil to sell, but she wanted to sell it as a subscription monthly. She sold one jar. This is the beginning of selling coconut oil as a subscription and it paved the way for the second event which was a health fair on September 28th in Southport, Indiana. 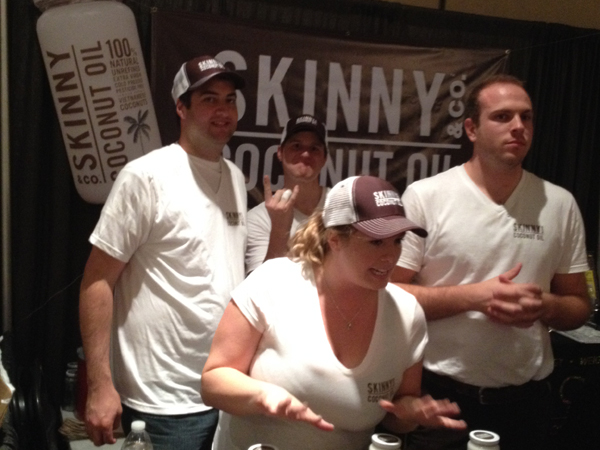 October 5th was a rainy day. I had to get up early in the morning to be in Richmond at 8 AM. At the same time, Matt and Chris were up early getting ready for the Gluten Free Living festival in Carmel. We had recently hired two interns, Michael and Stephanie, but only Michael was there that day. Rachel from the dentist office also stopped by to help sell. We sold almost 50 jars and I got my first check after 2 years of work. On the drive home Andrew Youderian gave me a “First Sale Shout Out” on his podcast. It was a good day.