How I helped an Indianapolis dental office through 100% turnover and go from their worst month ever to their best month ever in 2012.

When I worked as a business analyst at First Merchants I would often be doing staffing models during the day and working on web sites and IT work at night. After I was went full-time as a business consultant I offered staffing model services to one of my web clients. They trusted me because I had already got them to be #1 on Google for the term “Indianapolis Dentist” and their site was listed as one of the best dental websites. 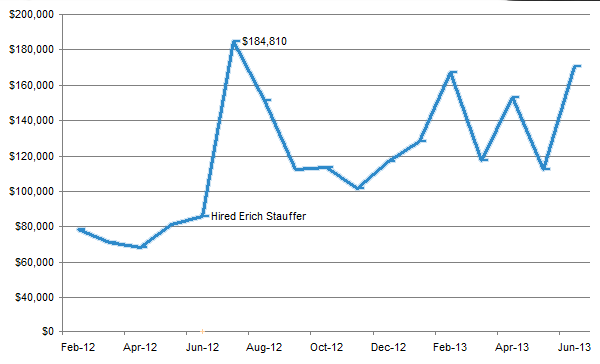 The business owner wasn’t as interested in tracking what each individual staff member was doing as much as finding out what each staff member does, ensuring it’s documented, and making sure there were “systems in place”. At that point he had recently converted his practice management software from Practiceworks to Dentrix and two staff members had already quit. There was real fear of losing all “tribal knowledge” of how his business was ran.

One of the first things I do when I start a staffing model is to simply observe what is going on in the office. For the first two weeks I would ask questions, watch processes, and document as much as I could. If there was a name for a process I would use that – otherwise I would create a new name for it. I started identifying positions and roles (they can be different) and then placing the newly quantified tasks into ‘piles’ under each type.

To document the process I setup the office with Google Apps and used the Google Sites portion of it to create an Intranet for the company. Each staff member was given their own company email address which they could use to login to the site as well as share calendars, documents, and email each other. Distribution groups were setup for different team members including the front office, clinical team, and the “everyone” group.

After a short while, a clear picture began to emerge. There weren’t just issues with cr0ss-training, there were issues with the staff themselves. It wasn’t long before there was more staff turnover. It was like they were “jumping ship”. The decision was made to get some new leadership into the organization so the long-time manager was fired in June. I became the interim manager and began to re-build the new staff.

One of the first things I focused on was “getting the right people on the bus”. We sought after and hired people who cared about people first and had a great personality. We had learned that those are two things that can’t be taught so those were the most important things we sought after. We didn’t settle for a person just because they filled the position and at some times were working with a crew of as small as 3 people while we continued to look.

Once we had the right people in place we began working on the proper processes. We started using checklists to ensure the critical morning and nightly procedures were completed. There were many times when they were not and the staff did not like using the checklists at first, but over time they learned to first appreciate them and then not need them as it became second-nature. This helped a brand new staff have consistency and learn faster.

While the old staff did not understand technology innately, the new staff embraced it. They began using email to communicate, began referencing the Intranet for critical information (the previous staff kept an old Rolodex on the front desk that contained all of the information they’d ever reference – this was typed up into one page on the Intranet affectionately titled, “Rolodex”). And a new wireless camera system was setup to take patient photos.

We signed up for Demandforce and Angies List. We began using Google Adwords and revamped the website. We added more social proof, more testimonials, more web pages, and more blog posts. We added more social networks, posted more often, and were more engaged with our patients online. As a result, referrals from the Internet went up along with web site visitors. We used Google Analytics to track the progress.

By first focusing on the staff, then the process, then the technology, and finally the marketing – we had the right people who were given the right instructions for the best technology, which was supported by the best marketing techniques. The result was an initial boost of 116% the first month, followed by an average increase of 72% for the next five months compared to the five months prior. How can I help you get similar results?