How eReaders (also written e-Readers), which are digital readers for eBooks (also written e-Books) have taken over the tech news and gadget landscape? From Amazon’s Kindle™ which was first released on November 19, 2007 to Barnes and Noble’s nook™ which was first released November 30, 2009 to Apple’s iPad which was released April 3, 2010, there clearly is a revolution going on in how books are read, purchased, stored, and shared. 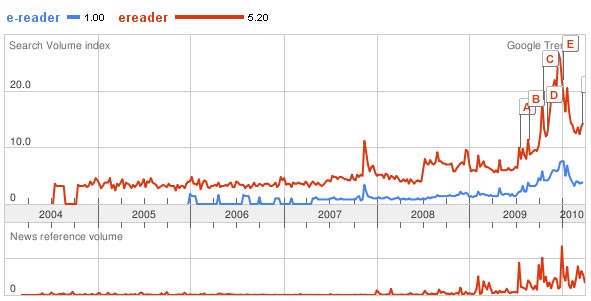 The first chart shows the dramatic rise in news articles related to ereaders starting in 2009. This chart also highlights the differences in spelling of the different terms for ebook readers. While there is no official way of spelling it (both ereader and e-reader are acceptable), Google Trends clearly shows that “ereader” is used more often or is more popular. In general I think that if hyphens can be avoided, they will be, just as in “e-mail” is more often written as “email.” 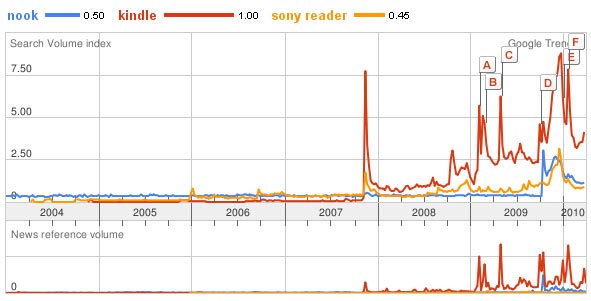 The second chart shows the steady rise of Amazon’s Kindle, followed by the nearly identical rise of Barnes and Noble’s Nook an Sony’s Reader. Other ebook readers like the Que and Alex don’t yet register in comparison to the traffic of these other major players, but if you compare Apple’s iPad against this chart, it makes the Kindle look pathetic in comparison.

Now these are mostly news trends and not necessarily a reflection of popularity or quality, but it does highlight a tipping point in the use of ebook readers that happened at the end of 2009, about a year after the market crash in 2008. Despite a recession and a bad world-wide economic situation, consumers have still went out and purchased not just ebooks and ereaders, but e-reader accessories, which can sometimes equal or cost more than the ereader itself. Nook covers, for example, average around $25 each.

How about you? Do you own an ereader or plan on purchasing one in 2010? Answer in the comments below.