My son is 4 years old. He was born the same day Lehman Brothers collapsed in 2008. He collects things to build with in hopes that one day I’ll take the time to do that with him. Right now he’s asleep, right outside my door, on the floor, next to his red bucket of things to build with me.

One day I took him out to a junkyard I used to drive by when my wife and I each ran a paper route. We were trying to keep from losing the house and were behind on our mortgage. The bank made us a deal. They said we could stop paying for a while, and then make a big balloon payment at the end. I didn’t see how that was much better, but I signed the papers anyway.

Kevin wanted to build a rocket. (That is my son’s name.) But what he really wanted was to fly in a rocket. We’d go in the closet and I’d simulate a launch sequence. He never bought into it. I kept saying, “You just want to fly up in the air, but how are you going to get down?” (Safely, I meant.) He wasn’t concerned with that. He just wanted to fly. And I was going to help him build a rocket. 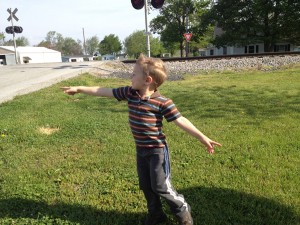 When we got to the junkyard, there was no longer any rocket parts laying around. We saw a train. I stopped. We raced to get out of the car. He pointed at the train. It was exciting. When we got home I found some parts in my shop and we built a small rocket model, about three feet high. It wasn’t much and he didn’t care for it. He wanted something he could climb in, something he could fly.

One day I came home and he had built an airplane out of scraps of wood he had found and some tape. I thought it was pretty cool so I gave him some more wood to see what he could do. We even made a video of it. He seemed to be more creative with less. There isn’t much in his bucket – just some wood, a marble, a miniature cardboard cutout of Superman, and some string. He wants to fly, but most of all he wants time with his dad.

We were able to make that balloon payment and keep the house. Shortly thereafter I went full-time in my own IT/web consulting business. I helped a lot of people, but somewhere along the line I forgot what I was doing, and who I was doing it for. I stopped asking how I could help other people and was only focused on myself and what I could do. I had to get back to my core values, but i didn’t know what they were. I seemed lost. My son doesn’t know what he’s going to build, but he knows that if he collects enough of the parts he wants to see in the finished product, the end result will be something he can be proud of. That’s what I started to do, too.

My first value was more of a mantra: help people. If I wasn’t helping someone, I didn’t want to do it. While this seems simple at first, there are a lot of things you can do that are not helpful to people. Some are annoying, some are exploitative, and others are just downright harmful. I wanted to help make the world a better place by helping people. My second value was: add value. In every transaction, interaction, and blog post I wanted to be adding value. I don’t want to be noise, I want to be a part of a community where my clients and I look forward to seeing each other.

One of my favorite scenes in any movie is in Apollo 13 when the engineer at NASA dumps all the parts on a table and says they have to make ‘this air filter fit in this air system’. That is like a dream come true for me. I would love to have that challenge. I’d like to think that I wouldn’t have made two different air filter systems for the same ship, but there’s something about the puzzle element that fascinates me. I wonder if that’s what my son feels when he’s building. I hope I’ll soon find out when he wakes up and I make time to build.