Are you just going to stand there?

Sep 12,2009 Comments Off on Are you just going to stand there? Attitude, Birthday, Job Hunting, law of attraction, Law of Focus, Motivation, Thoughts 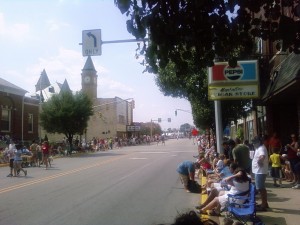 I was standing with my family, talking and waiting for the parade to start.  It was that time of year again.  The Pork Festival had come to town and today was the big day.  On Saturday, there is a big parade and everyone who wants to see it lines up along the parade route for a view of the action.  My family had decided to set up under a tree and so I was hanging out in between the tree and the road.  You can see from this picture that I was basically riding the yellow line.  I was going to head back to the house either at the start of the parade or before in order to be at the house in case guests arrived early for my son’s first birthday party, but as I was standing there, the guy to my left said:

Hey buddy, are you just going to stand there? I don’t mean to be rude, but I won’t be able to see the parade from here if you’re standing there.

I replied, “No, I’ll be leaving before then.”  It was rude, but I didn’t really mind.  It made me think, “Erich, are you just going to stand there or are you going to do something about the situations you find yourself in right now?”

I’m a big fan of the ability to change your outcomes based first on changing how you feel and think on the inside.  However, in practice this is not always easy to do, nor sometimes does it seem to be effective.  The Law of Attraction would tell you that the reason things don’t always seem to improve is because I say they don’t. This may or may not be true, but the result is the same.  I am going through the motions: I am limiting negative thoughts, I don’t listen to the news, I only read or listen to positive and/or educational material, I focus on what I want, not what I don’t want, and I take action.  I have been sleeping less and working more.  I am focused on Internet Marketing as my primary business model. And the results are starting to show.  I now have blogs that make money daily, but there are still those which are not.  The Law of Focus says that whatever you focus on, expands.  That is why T. Harv Eker says not to complain, but to act instead.  Acting is what I am doing, I just wish it was happening faster.

So what are you going to do about it?

Successful people never quit.  They are experienced at overcoming obstacles because they view themselves as bigger than any obstacle.  I will double-down and refocus my efforts, to ensure success.   And…my parents just showed up.  Let the party (and the rest of my life) begin!