A friend of mine recently started testing two social media tools, Seesmic and Path. Here is what he discovered:

I would recommend Seesmic. It currently is free only because it is in beta. It will be a pay service when it comes out of beta.

Pros:
-Can post to multiple social media outlets at once (and can easily switch your mix in-message)
-Can handle multiple iterations of the same social media platform (your can connect as many twitter, etc. accounts as you want)
-Can schedule post and reliably deliver at the scheduled time
-Adjusts the “Characters remaining” indicator according to the max of the minimum social media platform (i.e. it shows 5000 char remaining if just facebook and 140 if twitter is in the mix.)
-handles photos, links, and tags accurately and intelligently
-interface is simple, efficient, and aesthetically pleasing; good UX
-has a “save drafts” queue

Cons:
-Only posts to facebook, twitter, and linkedin
-their icon/badge (especially on facebook) looks stupid and will be on your messages viewed on the web
-the cost of service is unknown
-there isn’t a “pending posts” for posts that have been future dates
-setttings management is somewhat limited on the iphone app – some things have to be done on web
-links aren’t auto-shortened (may be too long)

As an alternative, there is Path. Compared to Seesmic, Path’s advantages are:
-free
-can post to tumblr and foursquare also (but not linkedin)
-can be used as one-stop social media manager and public-or-private quantified self tool
-added functionality to tag with people, places, music

As an alternative to Seesmic, Path’s disadvantages are:
-can’t schedule posts
-no characters remaining gauge
-no “saved drafts” page
-can only establish one profile per social media platform (1 facebook, 1 twitter)
-difficult to add new profile once you have it set up

Back in June, Mashable wrote an article on 7 Facebook book printing companies. As Christmas is now approaching I remembered that article and wondered if any of the companies let you print other people’s Facebook walls. Not everyone wants a book about themselves for themself, but if someone else gives it to them – hey, that’s a gift.

Out of the seven Facebook book printing companies, only two let you print a friend’s Facebook information: Book of Fame and Ego Book. I also added Social Print Studio, which doesn’t print books, but does make posters and photo albums of your or one of your friend’s Facebook pictures. Between Book of Fame and Ego Book, the biggest difference is not price, but layout. Book of Fame will print one status message per page, essentially making a customized notebook for someone, while Ego Book is more of what you would expect in a Facebook book: pictures, wall posts, and comments of you and your friends. You’ll pay more for Ego Book, but you get what you pay for. 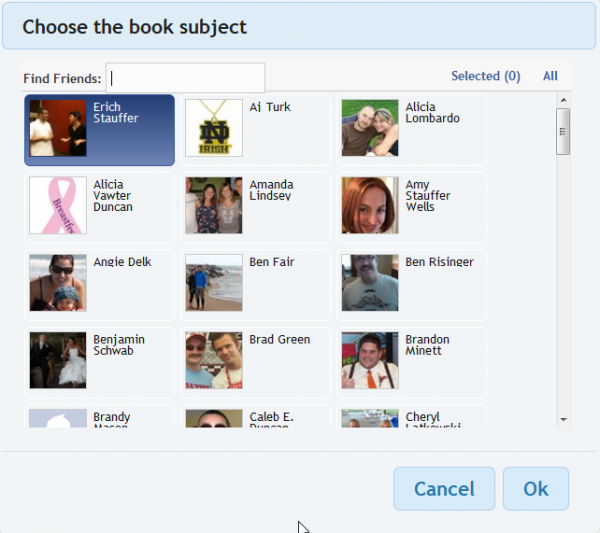 Ego Book – Choose who you want the book to be about.

For those interested only in printing their own Facebook wall, Ego Book is still a good choice, but you might want to compare it with Jot Journal and Year Bound. Jot Journal is less expensive, but offers fewer options. Year Bound had more options, but it’s software seemed buggy. I had to try it several times before it would stop ‘blueing out’ the screen.

For those interested in printing their stats for the past year, Social Memories is the only choice on the list. Even if you don’t choose to buy it, you can still create the book and post it to your wall as an album for free. To print the 25 page book it costs $27 US.

Here’s a link to the Facebook Book Printing Chart I created in Google Docs.

Nov 2,2011 Comments Off on What Meetups Mean to Me Agile, Meetups, Social Networking, Startups

We started out meeting once a month, and then weekly at his house in Noblesville. He didn’t even have his own computer so we had to use the computer in his mother’s bedroom. I researched gaming engines and different programming languages, but we ended up going with a type of game similar to the NES game, Shadowgate. 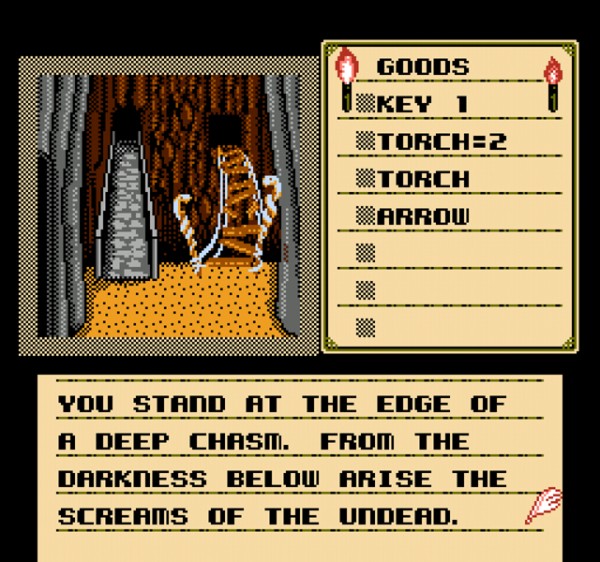 We had agendas and a group logo. We created the first screen in the game and started working on the story line, but then that’s when things started to fall apart. In April of 2005, Meetup began charging group owners a fee for hosting a group and the bottom sort of fell out as far as my desire to make games. What I realized is that I didn’t want to make games, I wanted to learn how to make games. Once I did that, my interest level was gone. My partner continued the group and the game for a while after I left, but I didn’t really start going to Meetups again until three years later in 2008.

A Brief History of My Career

I worked full time for the last two years I was in college and then immediately after helped a friend start a computer repair business on the side while continuing to work full time. It was during this time that I started going to Meetups, but I didn’t start going again until I left that job I had through college, started my own business, and got a new job in IT in October of 2007. This is when having a day job and going to meetups felt like I was living a double life. During the day I was a computer technician for an IT company and by night I was a web designer wanting to learn more about Adobe products or PHP.

Through web design and SEO work, I was introduced to the world of affiliate marketing and started making money that way too. Eventually my web design customers started using me more for their technical needs and I began acting as their outsourced IT firm, or simply, their “computer guy.” Eight months after doing IT full time, I became a business analyst at a mid-sized, regional bank. By August of 2011 I was making enough from all of my side ventures to go at it alone so I quit my day job and went full time on my own. That’s when I really started to take advantage of meetups.

Why Go to Meetups?

When I worked for other companies I was around other people all day long. We had meetings. I sometimes got to go places on the company’s dime. Some of these times were good. Most of them were not noteworthy. However, once they were gone, I started to miss that in my life. Sure, I met with clients occasionally, but for the most part I stayed in my office at home. While my family is a joy to me, there is a certain need to go beyond that and meetups can help with that. I wouldn’t go as far as to say I’m lonely, but there is a certain amount of Edward Norton’s Narrator that goes through my head when I visit a group for the first time. 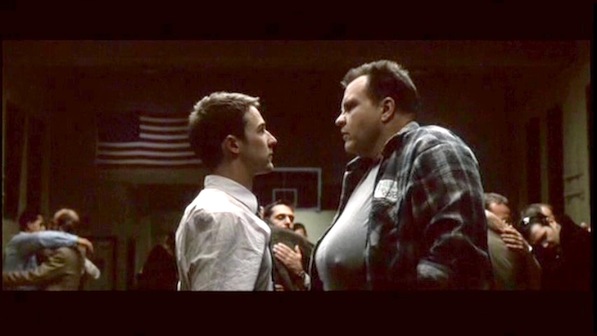 To Form an Identity

What consistently meeting new people does to you is to help define who you are. This is partly because of the amount of times you have to explain who you are and what you do to new people, but also because simply by going to a particular group, you are associating yourself with that type of person. I’m currently a member of 16 meetups: Affiliate Freelancers Indianapolis, Affiliate Summit Indianapolis Meetup, AgileIndy, Central Indiana Entrepreneur’s & Vendors, Coaches, Consultants, Authors, Speakers & internet marketers, Esri Dev Meet Up Group – Great Plains, Geeks with Swag, Indiana Small Business Networking, Indianapolis Lean Startup Circle, Indianapolis Marketing Group, Indianapolis Search Engine Optimization & Internet Marketing, Indy Cowork, IndyDevHouse, TechLunch, Verge, and the WordPress – Indianapolis Meetup Group. I recently spoke at the affiliate marketing group, which gives me credibility with the speakers group, even though I already am a consultant.

While I have been encouraged to get my masters and have gone back to school for Microsoft, A+, and Network+ certifications, meetups allow a different type of continued education in a wider array of fields. They are also the fields you’re most interested in learning about, or else you probably wouldn’t have signed up or gone to the meeting. Even though I’m profitable with affiliate marketing I still learn things from my affiliate marketing group, but a better example may be the Agile Indy group I attended last night. I had no idea what Agile was, but I kept hearing it and seeing it so I wanted to find out more about it. I wanted to learn. I can’t say I’ve gone to a traditional classroom much with that mentality. If you’re interested in what Agile is, review the Agile Manifesto or visit David Christiansen’s blog, Technology Dark Side. Speaking of affiliate marketing, David makes $2000 a year from advertising Rally Software on his blog. Rally sponsored last night’s meal, which brings me to my next reason.

Most meetups either serve food or meet at a restaurant where there is an opportunity to eat food. If you enjoy breaking bread with your fellow man around a topic you love, what better place than at a meetup. The early Christian church would call this their communion time, while the modern church might call it “small groups”. What are meetups, if not small groups of people, passionate about a topic? One exception to “small” may be Verge Indy, which currently has 1,280 members and regularly has to limit members to their events at Developer Town. Most meetups who serve food serve pizza and most of the time it’s free, but there’s no such thing as a free lunch so be prepared for the corporate sponsor to pitch their goods to you. Don’t worry if you’re not interested, maybe one day you will be. Maybe one day you’ll be the sponsor.

You probably can’t just walk into Miles Design or Allegient‘s offices, but that’s exactly what I did when I attened Joomla Indy and Agile Indy, respectively. While Joomla Indy isn’t an official meetup, it still meets regularly, in-person, around a topic, which is what meetups are all about. Tonight I’ll be attending the Lean Startup at Green is Good off 86th and Zionsville Road and the Esri meetup at Harry and Izzy’s on Illinois Street, downtown Indianapolis. When I was a business analyst I got to visit the Greater Indianapolis Chamber of Commerce’s board room once, now I’m visiting new board rooms every month.

If you’ve ever been told that you need to get out of comfort zone to grow, meetups are a great way to do that. Most of the people at the meetup I attend, I don’t know before attending. In fact, it’s actually rare for me to know someone there at all. However, once I’ve gone once, I do at least recognize them and can start to get to know them. Networking is a natural result of getting to know other people and meeting new people. Sometimes business cards are passed around and sometimes they are not. Meetups that are specifically setup to network don’t seem to be as popular as ones that are setup around a specific topic. What makes Verge so popular is that it brings together inventors, startups, and venture capitalists with those interested and willing to help. The energy there is intense and the barriers to entry are low. There is no fee for most events, food is provided, and those attending get the chance to pitch and network with others. It’s a great mix.

Whatever you’re trying to accomplish, there is probably a meetup out there to help you do it. Whether it’s meeting like minded people for encouragement or collaboriation, or learning from others who have paved the way before you, meetups can help you become a success. As Eric Willke, agile adviser and speaker at Agile Indy said, “Know you can succeed,” and to that I add – “and you will.”