That’s what I wanted to find out. I’d never ran a Twitter ad before. You can run ads for more than just new followers, you can also do it to drive more engagement (retweets, favorites, and clicks). I wanted to experiment with gaining new followers.

I’d had experience running Facebook ads before for new Likes and Google Adwords for page clicks. I was familiar with setting a budget, identifying a target audience, and crafting the ad text. This was no different. The first step is choosing @usernames.

This was an ad for @skinnycoco so I targeted two of it’s competitors as well as “users like our followers”. The latter means similar interests and demographics. You can add multiple usernames and even exclude usernames you don’t want to target.

Like Facebook ads, doing the above step gives you an estimate of reach. In my case it was 7K. The next two steps allow you to choose interests by browsing categories and to choose locations. I chose not to choose a category and chose United States.

The most important aspect of creating the ad is the text of the ad itself. You can either choose from an existing tweet or create a new tweet. Anything you could post under a normal tweet can be posted here (ie. text, picture, or link) in addition to “cards”.

Twitter Cards allow you to attach rich media experiences to tweets about your content. If you’ve ever seen a longer post with text, image, and a call to action underneath, that’s a Twitter Card. These cards can be used at your promoted tweet in your ad. 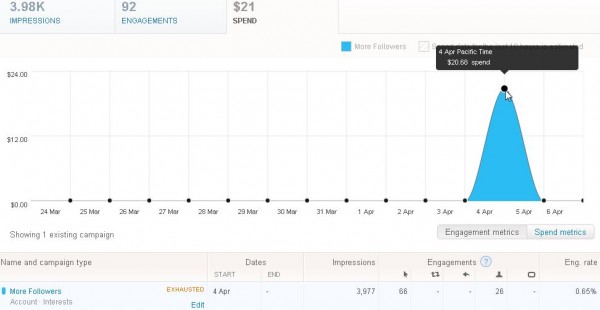 What Could Improve Those Numbers?

The first thing I would change would be to try different tweets and run them at the same time to test engagement. I didn’t realize that you could, like with Facebook and Google ads, run multiple ads on a single campaign. If I do it again, that’s what I’ll do.

Why Did Instagram Succeed When the Color App Failed?

We hope you’ve enjoyed sharing your stories via real-time video. Regretfully, the [Color] app will no longer be available after 12/31/2012.

That was the message posted on Color.com [Update 7/15/2003: The site is no longer up.], the domain Color Labs paid $350,000 to acquire in 2011 almost a year after Instagram was founded. A year later their photo sharing app would be on the way out while Instagram was getting bought for a billion dollars. What went wrong? Why did Instagram succeed when Color failed? 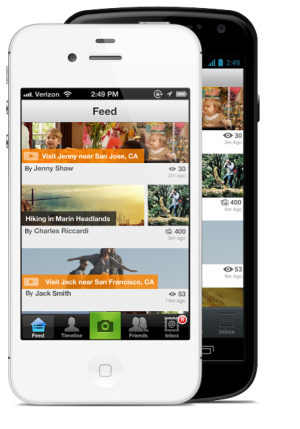 Color Labs was a start-up based in Palo Alto, California whose main product was a social application for photos called Color. It allowed people to take and view photos matched to a location. Color grouped photos based on a user’s friends so that they are more likely to see those pictures that are most relevant. Like Color, Instagram is an online photo-sharing and social networking service that enables its users to take pictures and optionally tie them to a location. Unlike Color, users can apply digital filters to photos and share them on a variety of social networking services. It confines photos to a square shape, similar to Polaroid images, which along with the filters gave photos a retro look and feel.

A Difference in Startup Methodologies

Color Labs started after co-founders Bill Nguyen and Peter Pham received $41 million in funding between 2010 and 2011 from Sequoia Capital, Bain Capital, and Silicon Valley Bank before the app had a single user. Conversely, Instagram was started by Kevin Systrom and Mike Krieger in October 2010 with $500,000 and teams of just a few people. As Instagram introduced successful products and attracted users, they slowly raised more money and hired engineers. Meanwhile, Color Labs spent $350,000 to buy the domain color.com (and an additional $75,000 to buy colour.com), rents an office in downtown Palo Alto, California, where it employs 38 people to work in, according to the New York Times, “a space with room for 160, amid beanbag chairs, tents for napping and a hand-built half-pipe skateboard ramp.”

Instagram’s $500,000 seed funding round came on March 5, 2010 from Baseline Ventures and Andreessen Horowitz while Systrom was still working on Burbn. By February 2, 2011, it was announced that Instagram raised $7 million in Series A funding from a variety of investors, including Benchmark Capital, Jack Dorsey, Chris Sacca (through Capital fund), and Adam D’Angelo. The deal valued Instagram at around $25 million and later that month, Facebook made an offer to purchase Instagram and its 13 employees for approximately $1 billion in cash and stock. By May of 2012, the number of photos has exceeded one billion. Google offered to buy Color for $200 million in July of 2011, but Color Labs turned down the deal. They were later acquired by Apple (mostly for their patents and talent) in October 2012 for an undisclosed sum.

A Difference in Responses to the App

On March 24, 2011, Color Labs launched its first application “Color for Facebook” in Apple’s App Store and within a week released an update allowing users to see photos from events “Nearby”, a “Feed” of relevant photos, and a “History” of groups that users can participate in. In June 2011, less than three months after the company officially launched, Peter Pham left Color. When it first launched, the application had around 1 million downloads, but as of September 2011, the service had a little under 100,000 active users. The app was poorly recieved, attracting few users and many who did not understand what it was supposed to do. One reviewer in the Apple App Store wrote, “It would be pointless even if I managed to understand how it works.” Users were confused with the application’s user interface and purpose. Its initial rating in the App Store was 2 out of 5 stars.

For Instagram, the response was much different. It rapidly gained popularity, with over 100 million registered users as of January 2013. Support was originally available for only the iPhone, iPad, and iPod Touch, but on April 3, 2012, support was added for Android phones. Instagram for Android was released[18] and it was downloaded more than one million times in less than one day. An app rating under 3.5 stars makes users considerably more reluctant to download the app. With an app rating of 2 out of 5 stars, the Color app was doomed. Once entered into the cycle of bad reviews it was nearly impossible to break out as there were wasn’t enough new downloads or positive press to bring the average back up and over the 3.5 stars mark. Meanwhile, as of this writing, Instagram has 4.5 stars ouf of 4 on the Apple App Store with over 62,000 reviews.

A Difference in Purpose

Color was first meant to help you find and share pictures related to your location, but Instagram was solving a different problem. They were making mobile camera photos look better. The Color app only worked if other people were using it (a chicken and egg problem), while Instagram solved a problem people had right away. This could have been because Kevin Systrom had already developed a check-in app called Burbn. Josh Williams of competitor check-in app, Gowalla, said, “Early user feedback, coupled with a desire to avoid the check-in battle…led them to drop everything to focus on one simple feature: photos. They made the act of taking and sharing photos (many of which just happened to be location-tagged) fast, simple, and fun.”

Color was a company in search of a product. They didn’t have much more than a mountain of cash when they started, but it was spent on things like numerous employees, fancy offices, and marketing rather than product development, user feedback, and customer interviews. Color may become a PR lesson for the future as they may become legends for squandering one of the biggest and most covered product launches in app history. On the flip side, Instagram already had a product they were trying out, were listening to their users, and created a new company based on the results. They continued to listen to their users and made their product even better. They didn’t hire a bunch of people or spend a lot of time talking about their company. Their product solved a problem, people liked it, and they used it. Each company had a runaway effect, albeit in different directions. Once those directions were set in motion, it was hard to change them.

In closing, I’d like to quote from Color’s about page, which says a lot about how the company thought. If you have a different opinion about why Color app failed and Instagram succeeded, please let me and other readers know in the comments.

At Color, we believe in the opportunity that the new mobile era presents and are excited about developing products that transform the way people share the stories of their lives. We work collaboratively, iterate often, and enjoy problem solving. Color is a company of entrepreneurs and innovators, highly skilled in their respective specialties, constantly striving to learn and grow. We’ve cultivated a very relaxed and informal culture and enjoy our extra curricular activities, which include but are not limited to: ping pong tournaments, ball pit acrobatics and impromptu poker nights.

So, if you have read any business journal, blog, or magazine in the last year you’ve heard ad-naseum about the power of Big Data. Combing through the digital exhaust that all consumers produce to better understand their preferences and habits can produce big dividends to big companies who have big data (notice the trend here?). But what if you are a small shop? You can’t pay MBAs and Quants to comb through your data to produce insights and most likely – you don’t have the mountains of data to pore through anyway. But, I’m here to say that Big Data is simply a way for a large company to feel like a small one. Your small business has the advantage!

Big Data is simply about responding to client behavior. It’s just that the huge companies have to hire those big guns to get down to knowing the client behavior before they respond to it. But your small business can gain that client knowledge without the technical know-how and the sterility that can come from a numbers-only approach like Target recently used to predict when their shoppers are pregnant.

So, ask what your clients think about you. Then be flexible, and most importantly, do something about what you hear! Here are four ways to how to ask clients what they would like more of:

A company who views their client as a number has nothing on a small business owner who truly cares about his or her clients. There is no better way to show that you care than to heed their desires and innovate new products and services to meet their needs inside of the relationship they already have with your business.

This is a guest post by Jason Cobb. Contact Jason today to boost your brand and grow your sales via effective social and web marketing.