Urban Exploration – My Life Under Bridge

Sep 26,2013 Comments Off on Urban Exploration – My Life Under Bridge Google Maps, Maps

Recently I’ve been exploring the development of an “outdoor adventure” brand and in my market research I ran across this Wikipedia article on urban exploration:

Urban exploration (often shortened as urbex or UE) is the exploration of man-made structures, usually abandoned ruins or not usually seen components of the man-made environment. Photography and historical interest/documentation are heavily featured in the hobby and, although it may sometimes involve trespass onto private property, this is not always the case and is of innocent intention.[1] Urban exploration is also commonly referred to as infiltration, although some people consider infiltration to be more closely associated with the exploration of active or inhabited sites. It may also be referred to as draining (when exploring drains), urban spelunking, urban rock climbing, urban caving, or building hacking.

I had never heard of that term before, but it brought back memories of my own urban exploration.

When I was in first and second grade I lived in a subdivision with a concrete ditch and a storm sewer at the end of the street. The entrance was like an inviting cave beckoning me to explore its depths. My brother and I would pack our lunch and our flash lights and set off through the drain seeing how far we could go. I remember looking up through the storm drains like windows. It was pretty dangerous. Don’t do this.

After moving to Southport in third grade I began playing under the bridge in the creek at the bottom of the hill in my subdivision. I would build dams and streams using the rocks and sand that had built up there. By the fifth grade I had moved on to other bridges around town where I was actively manipulating the stream’s flow using sandbags, rocks, and any tools I could find.
Franklin

In sixth grade I moved to the outskirts of Franklin into the “country”. There was a bridge and a creek there that I played in, but it wasn’t until high school that I started urban exploring indoors. The high school auditorium had a giant HVAC room in a giant attic. I would climb up into it during choir class and hang out and often thought about spending the night there. I never did.

My first two years of college were spent in Grayson which was located next to an interstate highway. There was a drainage pipe that went under the highway that I crawled through. Like in second grade I brought my lunch to eat once I got to the other side and like in Southport I took some time to play under the bridge on my way back. I actually took a video camera too and recorded the adventure, which is part of urban exploration, from what I can tell.

Like in Franklin, the auditorium at our school had a “secret room” which was locked from the outside, but could be accessed from the stage by climbing the backdrops. It was used as a sound and light booth for when they had plays (they never had plays). It had a phone. I would go there and call people to come hang out with me. They would never answer.

One day I signed up for a 24-hour prayer program and my hour was early in the morning around 2 or 3 AM. I’d wake up or stay up and walk around the dorm at night praying as I walked. Because of curfew I couldn’t leave the building. It was hard to stay awake sometimes and because I was mostly alone I started to explore. There was an access panel in the hallway outside of the bathrooms on the first floor. Upon opening the panel there appeared a ladder. I would go in between the walls and climb the ladder to the third floor and back. Do not try this at home.

After Grayson I transferred to Milligan College where I again lived in a dorm. Like Grayson, there was an access panel in the bottom floor of the building and like Grayson I filmed myself exploring what was inside. Unlike Grayson, this wasn’t a vertical shaft, but a horizontal one. It was sort of like a crawl space underneath the dorm that eventually emptied out through a small opening into the boiler room, which was locked from the outside. It was a neat discovery.

My Life Under Bridge

In November of 2008 I set about to tell a similar story using Google Maps Street view and Google Docs Presentations as a medium. I ended up with 19 slides that took me from my home in Raytown to my current home in Tipton. Apparently I’ve told this story before. 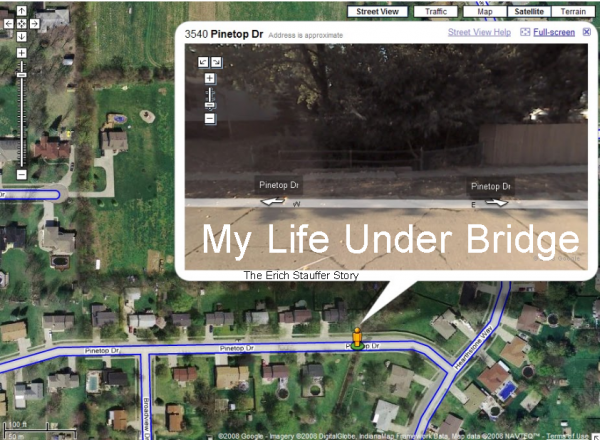 “It all started in Raytown, Missouri. I lived in a subdivision with a ditch at the other end of the road which fed into the local sewer system. We would explore the sewers with flashlights and see how far we could go.”

In Southport, “I would go down to the bridge and build dams and tiny rivers in the creek’s sand. There was a hidden waterfall in the woods.” It was near Strawberry Farm.

“Stephani lived off of Loretta Dr. Our older brothers were friends and our families went to the same church. They had a bridge near their house.”

“I dug my most massive canals and dams here using garden tools provided to me on loan from the Stephani’s house.”

“Then I moved to Franklin and played under a bridge near Mt. Pleasant Baptist Church.”

“When I got older, my friends and I set out from church one day to build a new hangout spot under the bridge at the bottom of the hill. We called it the Outdoor Blue Lounge. We painted the walls blue and were blamed for cows escaping. The county Sheriff made us paint over it with white, which later peeled.” 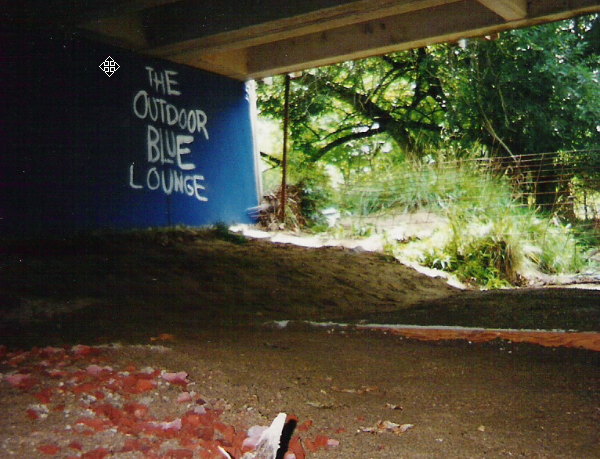 “One day I skipped some class to go on a hike. I packed my lunch and a change of clothes, and took my video camera along with me.”

“Next I moved to Milligan and roomed with Ben. I filmed my exploration of Hyder Mill by the creek.” Oh yeah, I forgot about that one.

In addition to urban exploration, I also like making custom maps.