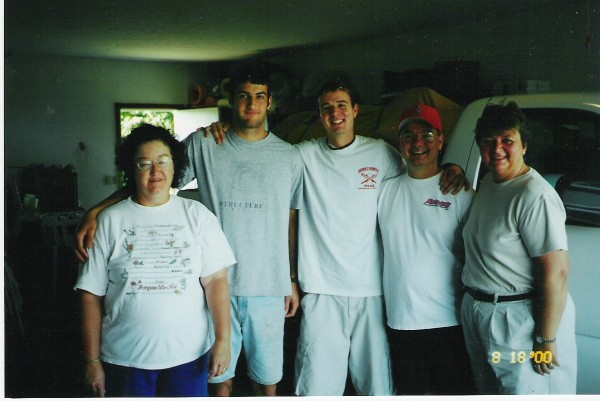 This is a story about how I ended up leaving Kentucky Christian College and helping Milligan College produce it’s first feature-length film called The Screen.

I was working at Camp Allendale the summer between Kentucky Christian College and Milligan. My friend, Ben, asked me if I wanted to go on a vacation with him to Tennessee, Kentucky, and Ohio. I said yes.

John Mann and I both happened to, separately, go to Milligan College after first attending Kentucky Christian College.  This is primarily because it offered a degree in Film, but I also knew I could study Computer Science there if I wanted to. I was studying Bible and Business at Kentucky Christian College (KCC), but was mostly ostracized for carrying a video camera around campus making videos. The last year I was there KCC put on a play written by John Mann, who was a former student who at that time was already attending Milligan College (Zac Parsons actually starred in that play). It was through this play, which my girlfriend at the time was producing, that I learned about Milligan’s film school, but I didn’t decide to go to Milligan until I saw a marketing poster for them hanging up at my church. I turned to Ben Fair and said, “Let’s go to Milligan,” and he said, “Okay.” I was a little worried about running into my old boss, the son of the camp director at Michiana Christian Summer Camp where I worked the summer before, but it turned out that he only attended Milligan for one year. By the time I got there I had already attended KCC for two years and I was like a freshman who went in with both eyes open – and I took full advantage. I told everyone my name was Dirk Douglas and made it a point to meet a lot of different people and do a lot of different things. I had a lot of stations there and I was mostly happy.

Since I was studying film and I auditioned to assist John Mann and Chad Garrison in producing Milligan’s first feature-length film, The Screen, which is a story about Cameron Jarrett who, like Walter Mitty, lives a boring life – some might even call it “pathetic”. Girls would not talk to him and the ones who did would often break up with him. The friends he has he annoys by reminding them how long it’s been since he’s had a date, but that’s all about to change when he meets a strange man from “Eye N Sky Productions” that turns his life into a television show (you know, like the Truman Show that came out two years before and appears in a movie poster in the background during this scene). If he agreed, he would be paid $1 million, but there was only one catch (there’s always a catch): if he told anyone about this, he would forfeit everything. After that initial meeting things started changing for Cameron. All of a sudden girls were asking him out and he was the life of the party, but then things started getting weird. First a friend got an STD, another was a victim of alcohol abuse, and another got his girlfriend pregnant – he even inadvertently dates a 16 year old. “No!!!” All of a sudden The Screen begins to ask if what we are seeing is really real? Then all of a sudden the movie kind of turns into The Matrix (which came out a year prior in 1999) and his life is all of a sudden really worth watching. Chad Garrison currently lives in Las Vegas and runs Faith Road Productions and SGT John Mann is an Emmy-winning, fifteen year veteran of television and film and is currently serving as a broadcast journalist in the United States Army.

The Screen Trailer (2000) from Chad Garrison on Vimeo.

At the time Milligan had about twice the number of students as KCC (now called KCU for Kentucky Christian University) at around 1000 students.  The culture was more academic and liberal.  By that I mean that the professors seemed happy making their classes too hard to pass and the student body seemed to be Christian by title only.  Milligan is heavily populated by students from the mega-church in Louisville, Kentucky, Southeast Christian Church.  Most of the students who attend get large scholarships.  When I attended, it cost $8000 a semester, but I believe it is now around $15000 a semester.  The layout of campus is very hilly and is physically challenging to get around.  The post office is at the bottom of the hill next to the creek.  The chapel is at the top of the hill next to the gym.  Just like at KCC, chapel is mandatory twice a week.  When ever the congregation stands or sits, the old squeeky chairs would cry out like a thousand hungry babies.  The dorm rooms had high-speed internet access, but at the time, there was only one dorm hall with air conditioning.

The college itself is about 20-30 minutes from any sort of shopping center, about 10 minutes from the nearest gas station.  Milligan students are called “Buffs” or “Buffalo’s”, which refers to the mountain that can be seen in the Western horizon (It’s got a hump like a buffalo).  To give you an idea of how rural this college is, my physics professor took us out to his farm to see his tractor.  In 1995 I took a mission trip down to Johnson City/Elizabethton (which are the two cities that straddle Milligan) to help out at a children’s home there. I was still in high school then. The man who ran that home later worked with me in the cafeteria at Milligan where I washed dishes.  It is an extremely poor area and so finding work experience for a future job or to help out during college was hard.  Although Johnson City seems like it would be a place to find jobs, there is already a East Tennessee State University there with lots more students already filling jobs there. On the social side of things, having a secular college near by did offer some opportunities to meet more people (I attended Milligan in the year 2000 and we didn’t have Facebook then, but we did have College Club).

I knew and met people from ETSU because of Wednesday night worship at a Johnson City Church.  I actually went to one church Wednesday night (because it was the cool thing to do and the drummer was awesome), another church on Sunday morning (because I liked the preacher’s daughter who processed our meal cards at the cafeteria door), and went to another church on Sunday night (because they had swing dancing on Sunday nights and cool worship). She made me a mix CD that I still have today, but we only really went on a group date in which she tried to hook me up with her friend.  I did hook up with a girl who was working backstage at a concert in Johnson City.  I met her on ChristianFriendFinder.com, but had never seen her in person.  She was friends with all the bands so was backstage eating with them.  I just found the door, walked in, got some food, and sat down next to her. Everyone was looking at me like “Who is this guy? He seems to know what he’s doing, but I don’t know why he is here.”  Eventually I found out that I had sat down next to the one I had came to meet and by the end of the night we were dating (if this interests you, read Everything I Know About Women).

I ran a radio show at night at the college radio station with Ben Fair, but I quit after three episodes.  I studied in the library at night with Jen from New York.  On the first day of school it started raining during orientation and I asked if I could walk under her umbrella with her.  She was very elegant, but only dated guys named Steve. I called her Elegant Jen. She was friends with Jennifer, who I once walked to the “college on a hill” across the street from Milligan.  Its a seminary.  When we got to the top of the hill we were all alone and should have kissed, but I didn’t want to.  We walked back down, sealing our fate as friends for the rest of the semester.  One night, we went with a group of people to a lake.  It was already dark when we left and I asked if we could play the new Third Eye Blind album, their second release.  When we got there, the driver (a guy from Southeast Christian Church) drove down into the lake, right on the edge of the cliff. I was scared and so was Jennifer.  We squeezed each other’s hands so tight, but we didn’t tip over.  We survived.

There were groups of people that hung together and ate together just like at KCC, just like everywhere, but I tried to buck that trend and specifically tried to sit with people who hadn’t asked me to sit with them – especially during lunch.  This, for some reason, allowed me to be more than myself.  Because I was new, they hung on my every word. They anticipated my responses. I became a hero, a comedian, a real riot.  It was not my intention at all, but my signature move was to find one girl at the table to “thank” for letting me sit with them and kiss her on the cheek on the way out.  There’s nothing like the sound of a table full of people erupting in hysterical laughter.  I only went to Milligan for one semester.  It was enough.  I have no desire to go back, even to visit.  I do not recommend Milligan for Milligan’s sake. What I do recommend is that you squeeze every last ounce out of college that you can and go into it with clearly defined goals.  If you wants to go to a Christian college in Tennesee, I recommend Johnson Bible College.  If she wants to go to Kentucky, I recommend Asbury.  If you wants to go to Indiana, I recommend Taylor, Huntington, or Anderson.  You’ll probably make up your mind based on a friend’s suggestion and a marketing poster, but you’re a good person for reading this far.