Everything I Know About My Dad

My dad’s name is Stephen, but he goes by Steve. I used to tell my friends that if you ever saw him running, you had better start running in the same direction because I’ve never seen him run in my life. It’s not that he’s not a fit dude, he just prefers to work out by actually working. One day while standing in line for food at church, a man trying to strike up a conversation asked my dad if he liked sports. He quickly and unequivocally said, “No,” and turned away. Steve has never liked or played sports. He recalls having to write a story about football in elementary school, where he attended a one room schoolhouse in the backwoods of Missouri, “I didn’t know anything about the game other than the field had 100 yards. When I read my story about how the player crossed the 50 yard line, then the 55 yard line, and so on, everyone started laughing at me and I was humiliated.” His humiliation didn’t stop at school. They didn’t have running water at home so in addition to the use of an outhouse, he had to take baths in a metal wash basin in the middle of the kitchen next to the wood stove. Steve must have seen technology as a way to escape the trappings of rural life in the 50’s and 60’s and as a way to differentiate from the jocks who mocked him. He gravitated towards the only tech he get could at the time: the wood and machine shops at school. 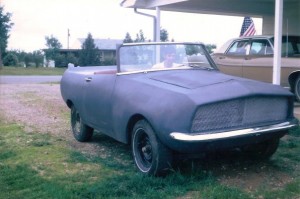 By the time my dad entered college, he had built every piece of living room furniture they owned, turned their back yard into a junk yard of stripped cars, and graduated at the top of his class. At college, Steve worked on airplanes in the Aircraft & Powerplant department. His favorite professor was Doc Swiger, a aircraft mechanic and theory instructor. Doc was an old, single, Navy veteran who didn’t go to any “marryings or buryings”. Doc would let Steve work on pet projects in the lab after hours. One of his projects was rebuilding a old tail-dragger Piper Cub airplane, which Steve then got to fly in. They also overhauled and repainted an old Volkswagen bug, which Doc loaned to Steve. It was in this car that my dad took my mom out on their first date to a park in Kansas City near the river. My mom made chili and on their way back they attended evening service at the church where they met. My mom credits Steve with her being able to pass the Physics class they had together. Steve had already finished his 2 year Associates Degree in Aviation technology, and was continuing with classes to complete his B.S. degree in Power Technology. He wasn’t confident in his ability to get a 4-year degree so he got his 2-year degree first. After graduation, he worked as an airplane mechanic for 3 months before getting a call to apply at General Motors in January, 1976.

Steve started working on the assembly line in the paint department under his father-in-law, Don. By this time, Don had worked long enough to have lost his sense of smell. Soon, an electrician position opened up at GM and Steve moved into that position. His first year at GM he and his wife house-sitted Don’s house out in Garden City during the week. In 1977 there was an oil crises in America and it was actually cheaper to buy a home closer to work than to pay the gas to drive an hour away. Don and his wife bought a house in Kansas City and Steve carpooled with Don’s brother, Bob. My dad still complains about Bob’s “on or off” heat policy in the car anytime someone doesn’t slowly adjust the temperature because of Bob’s habit of either turning the heat full blast or completely off. Living rent free and carpooling to work allowed my parents enough time to save up a down payment for their first house, “The White House”. That’s the house I was born in. They planted fruit trees in the back yard, had a vegetable garden, and cultured African Violets in the basement. Steve joined a woodworking club and enjoyed carving old men smoking pipes while sitting on a log. He would take us to the park and just sit on a bench while me and my brothers dug in the sand with the ride-on excavators.

In 1984, my parents moved into what we called, “The Brown House”. It was a 5 bedroom, 3 bath, 2 story with a split level entrance and a 2 car garage. When it rained the basement would flood because the backyard was sloped towards the house. Steve spent a summer digging a ditch around the house to divert the water and the flooding stopped. He had so much success, he convinced our church that he could help their flooding problem too. He dug ditches all around the church, diverting water away from the foundation, preventing it from flooding the basement, whose walls were yellow with water stains. He also changed light bulbs in the sanctuary and gymnasium, replaced air filters in the giant furnaces, and added more circuits to the antiquated electrical system. Whenever the church would have get-togethers in the gym, he would make me and my brothers setup and tear down chairs and tables. Steve also ran a Young Married class with my mom. One day they took their class out to Don’s farm where they had a scavenger hunt. I remember the two-flavors in one Bubble Yum gum I had in the back seat of the car on the way down and the gummi bears we found at the end of the hunt.

My brother’s and I asked our dad for a tree house until he eventually built one. It was more like a small house in the sky where he hung a porch swing underneath. He also helped us with our Pine Wood Derby cars, which he used to teach us about aerodynamics and friction. With his help we shaped our pine blocks into airplane wings for efficiency and sprinkled graphite on the axles for speed. We won every race whether you ran them frontwards or backwards. But if you have ever done a race, you know that each car is weighed before racing. If it’s not within a certain range, it can’t run. The problem was that each person’s scale was different and the scales that were used were carried around, making them inherently less accurate. We would either have to physically shave wood off the car before running or install bolts to add nuts for weight. This frustrated my dad because the cars were often painted and shaving the car would ruin the paint job and adding bolts would increase drag. Eventually, my dad came up with a solution to fix the problem. He carved a hollow area on the inside of the bottom of the car, filled it with some BBs, and held them in with a metal plate. If the car was too light or too heavy, he could add easily add or remove them, while keeping the car pristine and slick. 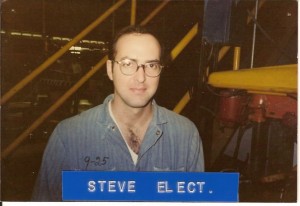 In 1988, my dad was laid off when the GM plant in Kansas City closed down and he was relocated to the GM Indy stamping plant as a journeyman electrician. About a year later he accepted the job within the plant as second shift Electrical Controls support, a per diem job. Sometime before 1996 he had to make the decision to go back to hourly electrician, or to become a salaried Controls Engineer. Deciding was a struggle for him, leaving the perceived security of the UAW union and contracts to the whims of GM towards the salaried workforce. Steve chose salary, but always wondered if the hourly would have been better. One day he was working on a stamping robot, which moves up and down, transforming a sheet of metal into a car door. For this particular problem, Steve had to go inside the machine, where the metal sheets went, in order to do the repair. A good electrician will always put on a public lock and his personal lock on a machine before attempting any repairs. This is meant to prevent any accidental injury that could occur if the machine were to become operational during a repair. On this day, a fellow employee came by and needed to start up the machine. They removed the public lock and his personal lock and started up the machine. When Steve heard the machine start, he grabbed his tools and dropped down into a safety hole, narrowly avoiding being crushed. He never told his wife.

In 1994 my parents moved to a home in Franklin and began a passion for landscaping. By 2002 they had transformed a blank canvas into inviting paths, ponds, and gardens and had the opportunity to feature their back yard in the Johnson County Glorious Gardens Tour. Steve was approached by many friends saying, “Could you come to our house and do something with our yard?” so they started their own landscaping business. Steve does most of the landscaping and my mom deals with the customers and the paper work. He did this in the morning before working a full shift at GM in the afternoon until October 2009 when he retired after 32 years.