The other day I was in downtown Indianapolis at the Circle Center Mall where I noticed two video surveillance cameras in one of the parking garage escalator areas. This would not have been a big deal, but all one camera was doing was looking at the other. It seemed like perfect fodder for Fail Blog, whose ironic content fits perfectly with Roman poet Juvenal’s famous line, “Quis custodiet ipsos custodes?” from his Satires (Satire VI, lines 347–8), which is literally translated as “Who will guard the guards themselves?” One video surveillance camera had probably just replaced the other without the former being removed, but it still goes to show the value of a good Indianapolis video surveillance analyst. 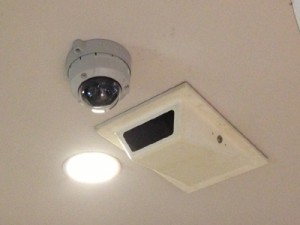 As an IT business analyst myself, I can understand the value of working with a company like AllThingsIT for Indianapolis network management because video surveillance technology changes fast and there are hundreds of different cameras out there – each with their different light sensors and lens types that create a myriad of features. AllThingsIT has the tools to create a turn-key video surveillance solution for your organization that can be proven effective before it’s even installed. If you’re in the market for a new video surveillance system or are looking to upgrade, contact AllThingsIT at 317-755-0200.