Apr 3,2015 Comments Off on The T-Shirt Designer Inside Me Business Ideas

Recently I was invited to sit in on a business startup meeting at a local Starbucks. While brainstorming with the founder, the seasoned t-shirt industry guru turned to me and said, “You must have a little t-shirt designer inside you.”

In high school and college I used to make t-shirts by writing on white t-shirts with red markers. I’d write inside jokes  like “Forks, Knives, and Spoons” or movie references like “She’s All That” with a giant arrow pointing to my left.

In 2007 I briefly considered starting a t-shirt business before going into web design with Telablue. “The problem I never addressed with you was the fierce pushback I got from my wife as soon as I discussed our plans for her business. That is why I didn’t follow up with the T-shirt idea and switched to Telablue,” I emailed my friend, Jason on 10/19/2007. 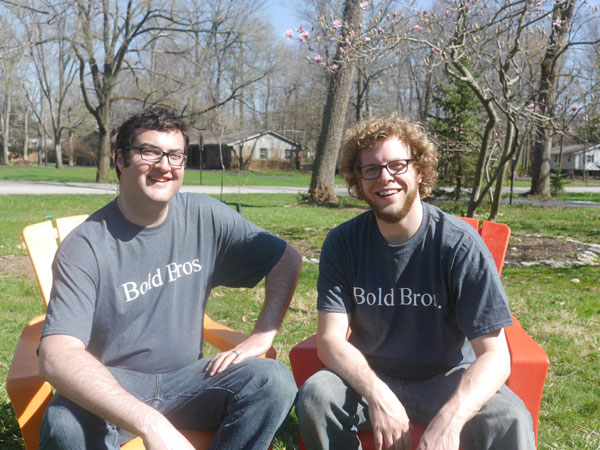 While sitting at my job at work or driving my daily commute I’d come up with t-shirt ideas and email them to my friends. On 9/28/2010 I had an idea for a “Picture of flux capacitor with ‘Capacity for Change’ written underneath.” Not good.

I started designing t-shirts almost as soon as I started learning about computers. This t-shirt blank is from 12/15/1996. I used it to design t-shirts for my local high school church youth group, which we called “SOTE” (Salt of the Earth).

Not long after, Jason and I formed the band, Shog, and so ideas for making Shog t-shirts soon followed after. This “Make a Joyful Noise Unto the Lord” Shog t-shirt idea is from 4/7/1997. It was designed by Jason, but never got printed. 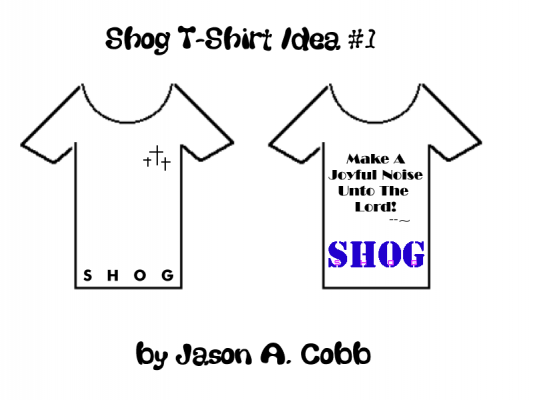 Jason and I weren’t the only one of our friends to get into the t-shirt design business. My friend Derek, came out with the “Jerk Club” in 12/27/2008. It only had 2 members, who are featured here in this self-deprecating picture below. 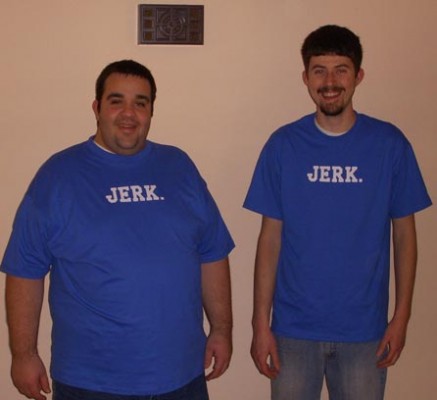 In 2010 I had the t-shirt design bug again and designed two shirts. This “Wheat Action” one is Settler’s of Catan inspired and is from 12/12/2010. I actually had this t-shirt printed, but gave it as a present to a friend who played Catan with us. 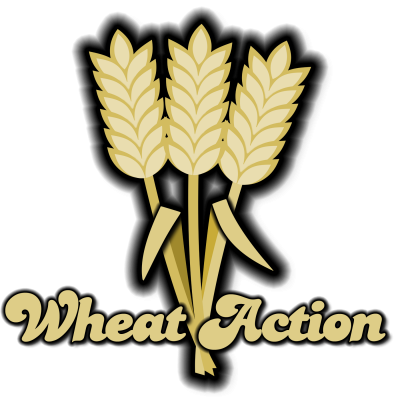 This “Wisconsin Venn” t-shirt idea is from 12/29/2010 and features the state of Wisconsin at the center of a Venn diagram featuring cheese, meat, and beer. I finally ended up traveling to Wisconsin a couple of years ago with Jason. Fun times. 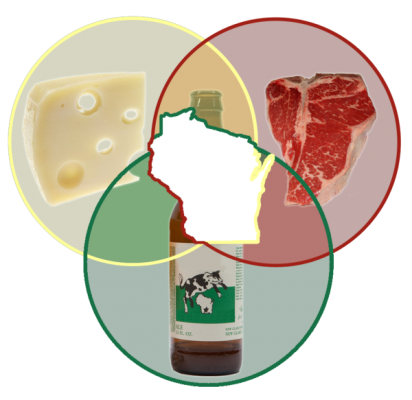 Before I get into Jason’s t-shirt design business, here’s one more t-shirt design from 7/21/2013 titled, “Sandwich Lover”, which was never printed. I do love sandwiches and have often played with the idea of starting a sandwich blog, but have not. 1/2/2016 UPDATE: This “Sandwich Lovers Sandwich” t-shirt is now available on Amazon. 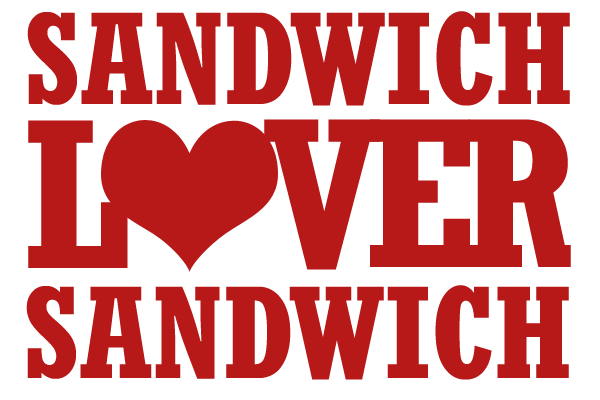 This is a history of High5, a t-shirt project Jason started in December of 2012. Here’s a gallery of the initial t-shirt ideas:

And here is the final shirt: 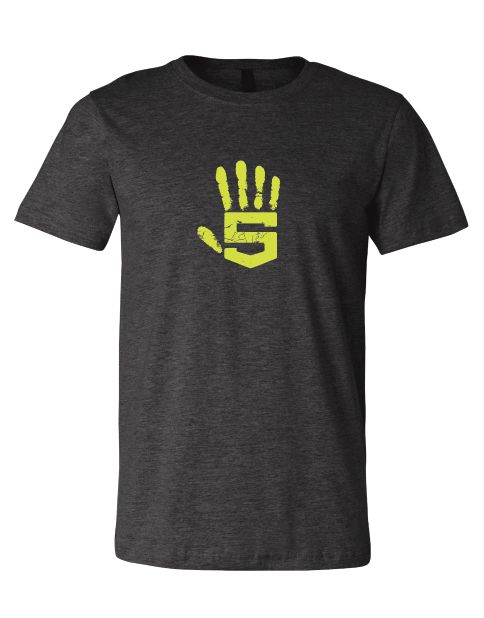 We’d meet up at local Broad Ripple restaurants and walk along the Monon to discuss t-shirt and business ideas. High5 was more than just a t-shirt company, it was a belief about:

In a lot of ways, High5 was a reflection of Jason’s values. He likes to set goals and smile. He knows his neighbors. He serves other people. He loves his family, takes them to watch the stars at night, and walks with them on the trail through life.

Although the website is no longer up, the Twitter account @wehigh5 still exists. It says, “We want to be there when you reach the top, cross the finish, & meet the goal. We believe in positive change, saying hi to strangers, and making things better.”

What Did Jason Learn from High5?

It was a learning experience for Jason who said, “I was naive in thinking there could be limited inventory. With different sizes, different color shirts, and men and women sizes (and maybe children) the sku’s expand dramatically.”

Despite getting accepted into Cotton Bureau, he couldn’t garner the necessary votes to get them to go to print, but he did end up printing them locally in Indianapolis and sold them on his own Shopify ecommerce store.

“The amount of effort to get true good quality from a printing partner is remarkable – as I’ve been able to re-confirm with Sycamore,” which is Jason’s latest business on bible print art for the modern home.

High5 was more than just a t-shirt business. It was about saying ‘hi’ to strangers, digging deep with each other, and encouraging each other. “There’s a real sense of pride that swells within me when one of my friends wears a high 5 shirt.” 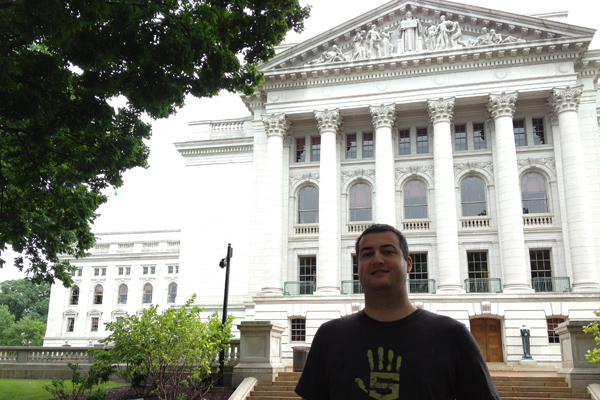 Update as of 9/2/2019: I now make custom t-shirts as a service for others in addition to the funny t-shirts I make for myself.

What is your no-code SaaS app idea?

Email me stuff you want archived (could be emails, pictures, or documents) and when your archive is ready to be printed (read: optimal page length reached), I’ll send you a Paypal link and have it shipped to your door. It will feature archive-rated, acid free, glossy paper and will be something you can put on your shelf as a paper-based archive for your most cherished emails (such as those from me or that first email between you and your spouse or child).

How does it work?

I get the emails and put the stuff in a book-making app. When the pages are full, I alert you that it’s ready to print, add a markup, get paid, and have it printed and shipped to you.

What are some reasons why it might not work?

People may be sensitive about sending their personal information to a person or service. Or the cost of markup may be higher than people are willing to spend for this “app”.

Is there anyone else doing this?

There is already apps that link to Facebook posts and Instagram pictures to allow those to be printed (they are consistent in size and shape, making it easier for apps to format). I also looked into Blog2Print and Blurb to print my blog.

What problem are you trying to solve?

I don’t have an easy way to take emails, blog posts, and Evernote notes and turn them into a printed, bound journal. In the past, I would keep paper journals. Now I keep that stuff digitally, but I still want to have a printed copy to put on my shelf to pass down to kids and protect from an electromagnetic pulse or some other catastrophic data loss or account lockout.

People born before 1990 who have children and a decent fear of loss of data coupled with a desire to leave a legacy (i.e. Scrapbookers, Baby book makers, Mothers, and Fathers).

Why are you doing this?

I’ve always wanted to be an archivist. You know this. But it’s also one of the 10 e-commerce ideas I had for 2015 (i.e. people are going to want to print more stuff to avoid The White Album Problem). 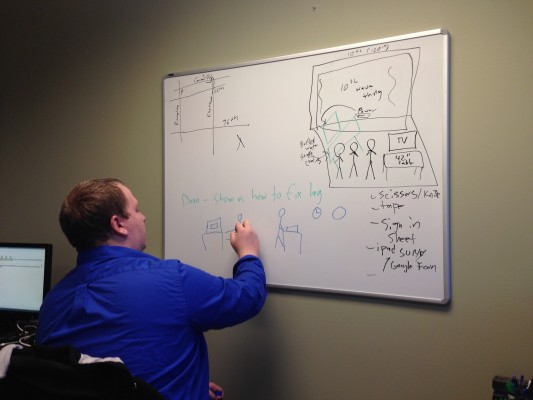 Epiphanies, Bright Ideas, Moment of Inspiration, and Flashes of Brilliance

It’s kind of the opposite of writers block where you’re sitting down in front of a computer screen or looking at a blank screen or a blank sheet of paper and having to figure out new ideas. What we’re talking about here is capturing ideas when they come. We’re talking about being intentional about that idea capturing process.

Being Prepared to Capture Ideas When they Come

In order to be intentional about capturing ideas, you need to be prepared for when ideas need to be captured. For example, let’s say you are in a meeting at work. What materials are you bringing to capture that material? For those ideas you typically would have a notepad and pen and you’re jotting down ideas as they are spoken. But if you’re really intentional about idea capture you might have a notepad in the car and a marker system on a suction cup in your shower. I recorded this blog post using voice recognition on my phone while driving, for example.

A Repeatable Method for Capturing Ideas

What I’d like to propose is a repeatable method for capturing ideas in any environment using a variety of tools. For example, you may find that for a work meeting it is better to record ideas on Post-it notes instead of lines on a paper or you might find that it’s better to use Evernote or to record the audio on your phone while driving rather than using the voice recognition function in a Note. However you might find that the voice recognition software built into modern smartphones can help you record ideas while driving, but you might find that the crayon in the shower is the best technology for that environment.

How to Process New Ideas Once You Have Them?

This prompts the question: What do you do with the ideas once you have them written down or recorded in some fashion? That brings us to the next part of the method: organizing the ideas that you’ve captured. Captured ideas can be organized using an even wider variety of tools than the ones used to capture them. Typical tools to organize ideas include:

What matters is that you create a system that’s useful to you to turn the ideas into action.

The third phase of the method is to turn ideas into reality. After a meeting, typically what happens is you’ll come back to your desk and you’ll type up the notes from the pen and paper into a Word document or an email and you’ll send those out to the attendees of the meeting. They might store the document on the file server or Dropbox and then it may or may not be referenced sometime before the next meeting to remember what you did at the previous meeting. What if instead each idea was treated as an individual object instead of a line in a document? This is similar to how a database works and a simple database creation tool called “Trello” works. It’s similar to creating bulletin boards and a bunch of white note cards that go on those bulletin boards. Since every idea is an object, it can easily have an owner and a next-action step. From there, it’s all about accountability.

The 3 Step Method from Idea Capture to Execution