Feb 1,2015 Comments Off on What Really Happened in Jake Gyllenhaal’s Enemy Movie? Movies

***Major Spoiler Alert***Do not read this if you don’t want the movie spoiled for you. It contains major spoilers. 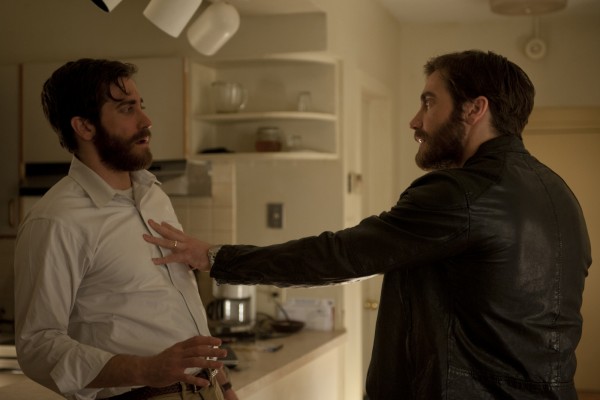 In Enemy, both men (Adam and Anthony) are same man, a married history professor who acts on the side, and fantasizes about having an affair. In the end of the movie, in his fantasy, his girlfriend is killed, but he quickly turns back to his old ways (represented by the most scary movie ending of all time, the giant spider).

Who is his girlfriend?

The girlfriend is not real. When the door buzzes, he doesn’t get up, he goes into his head. She brings over food to his crappy apartment, hangs out, then leaves without a word. It’s all a fantasy.

How do I know they are the same man?

When the two men meet, the first meet the room they meet in is number “221”, which means “two to one”. His mother says he has “a nice apartment, a good job” and that he should quit his dream of acting. When he is with his wife, she asks, “How was school?” She asks him about having an affair.

Reasons why they might not be the same man?

Unknown Name/Location to Wife? – Anthony makes up the name “Adam Bell” and writes it on a note for his wife to find. She Googles it, goes to the school, and he meets her there (as Adam), but acts (he likes to act) like he doesn’t know her. She can’t believe how far he’s going to perpetuate this fantasy.

Where does he actually live? Which apartment?

In the beginning of the movie we hear Adam’s mother’s voicemail where she sounds Russian like the other guy’s mother where she asks of his “new” apartment “how can you live like that?” and then we see a picture of the pregnant wife sitting on the bed in Adam’s apartment. She only refers to him as “Darling,” but he’s clearly sitting in Adam’s Volvo.

There are two apartments, one “good” and one “bad”. Because he’s a school teacher and acts on the side, because of the way his mother described it (“how can you live like that?”), and because of the shot of his pregnant wife in the background, it’s more likely that he and his wife actually live in the bad one.

There is a definite yellow hue when we see Adam, the school teacher who is with the “girlfriend” in the “bad” apartment and a more ‘normal’, white light when we see Anthony, the actor and his “good” apartment, but this isn’t like the green tint in The Matrix movies. It doesn’t necessarily mean that one is fantasy and the other is real because both have elements of each.

One ‘totem’ (to use Inception vocabulary) is his wedding ring (which just happened to be Cobb’s totem). Adam, the school teacher, doesn’t wear it, but Anthony, the actor does (except for when he’s playing Adam towards the end of the movie – it’s also partially responsible for the ‘crash’ that kills his girlfriend and ‘ends’ the affair).

If this topic interests you, read about more movies that question reality.

What are some motifs in the film?

Hallways – the beginning of the film starts with Adam walking down the hallway with a key while a guard walks behind him. When he sneaks into his own apartment, he doesn’t have the key and has the same security guard behind him who does have the key. These scenes are shot very specifically for the audience to draw the connection between the unknown guy at the beginning of the film at the club and his security guard, but you’d have to watch it again to fully get the connection.

Is there any other scenes that we’re exactly as they appeared in the movie?

In the teacher’s lounge, Adam is asked: “Are you a movie guy? In your free time I mean?” Adam responds, “I don’t know,”, but what I postulate is that the guy asking isn’t real. Here’s why: Adam tells him about a movie he’s recently seen recently that he really liked that he just happened to be in: “Where There’s a Will There’s a Way”.

On his way home he stops by a movie store to see if they have that movie, but they don’t have it. He ends up watching it anyway because he already owns a copy. Even the actor uses a fake name: Daniel Saint Claire. His real name is Anthony Claire.

What are some symbols used in Enemy?

Street Art – On his way home from work, he passes by a mural with the same man drawn multiple times. Behind that mural is the movie store.

Video Cameras – Even the security cameras don’t follow him around. When Adam is checking out Anthony’s apartment, he looks at the security cameras. If he didn’t want to be seen, he should have looked down, not directly at them for so long The director specifically decided to include them in the movie as the shot pans to include them and shows Adam staring at them as he walked by. As an actor, this is a symbol for how he’s not on camera (not working as an actor) as much as he wants to be.

Phones – Adam has a cell phone. He ignores it when his mother is calling at his apartment, but picks it up when Anthony calls him at school, but when he’s calling his wife’s apartment he uses a pay phone first and then a land line at his apartment. Pay phones are often used during affairs, which was highlighted in the movie by the same name.

Any other reasons why Adam and Anthony are the same person?

What does the director of the movie think the film is about?

The director states it’s about a man who decides to leave his mistress and go back to his pregnant wife. I don’t think he actually had two apartments or that he actually left his wife. I think he was just absent from her emotionally. Here’s why: After he turns off the radio after hearing about the accident from his fantasy. He wakes up when thinking about his affair and tells his wife, “I’m sorry.”

What do you think happened in Enemy?