UPDATE: Bustin Boards has confirmed that it’s a Bustin Boards Boombox longboard and after seeing the movie, it should be noted that there is only one longboarding scene in Iceland. The other New York scene mentioned in this article is ‘covered’ by CGI which makes it look like Walter Mitty is longboarding on asphalt. All pictures copyright of their individual owners.

Ben Stiller stars in and directs The Secret Life of Walter Mitty, where he is seen carrying and riding a longboard skateboard in several parts of the movie. At one point he’s longboarding down a hill in Greenland, while in another scene he’s longboarding down a street in New York City. The 2013 movie, which is based loosely on the original James Thurber short story and the 1947 Danny Kaye film, was filmed in Bronx, New York City, Greenland, and Iceland.

While the movie doesn’t come out in America until December 25, 2013, after watching the trailer I wondered what longboard Ben Stiller was using in The Secret Life of Walter Mitty movie. A reddit thread on longboarding in The Secret Life of Walter Mitty offered up the following clues. According to justchilln, “a Freebord was actually used in a dream sequence in which Mitty is snowboarding down the street of NY. Source- My buddy was the freeboarder.” You can see Ben Stiller filming part of this sequence in New York in this video below.

On June 14, 2012 Silverfish Longboarding posted the above video on Facebook where Jame Ka-stello pointed out, “It’s a Gravity Ed Economy, and Ben can actually skate, modestly as it may be – lets not get too fired up, the wires are there because they use that rig for a lot of stunts. Plus it would suck for ben stiller to catch a stop rock and faceplant I suppose.” And Aj Powell said, “At least he’s riding Paris Trucks“. However, Willy Staley noticed that, “the trucks are on backwards.”

According to user, thewatches, on Reddit, “I saw this movie in a pre-screening in nyc, and it’s fantastic, but they use 3 different longboards in the movie (it’s supposed to be just one board). They change it situationally, some downhill board like a landyachtz or something and two different Bustin boards.” While I couldn’t find a picture of a Land Yachtz longboard skateboard used by Ben Stiller in the Walter Mitty film, the pictures below are most likely a Gravity Ed longboard and a Bustin Maestro Pro longboard.

While I’m not sure how this fits into the story, I did find that on Nov 10, 2013, M Longboard Industry wrote on their Facebook page (translated from French), “What a pleasure when a huge company producing Hollywood knocks on the door of a small workshop shape French … On the occasion of the release of the film “The Life of Walter Mitty” January 1, 2014, 20th Century Fox has decided to win 3, Z-Shape M-longboard-industry autographed by Ben Stiller in person!” and “Ben Stiller on the set of “The Dream Life of Walter Mitty”, on the occasion of the French release January 1, 2014, M-3 longboard longboards industry, the effigy of the film autographed by the actor to be won at the national level through UGC! Soon find all photos of the production of these boards Z-Shape.” The associated picture was that of Ben Stiller holding the sign post, which is a different longboard skateboard than the other two longboards shown. 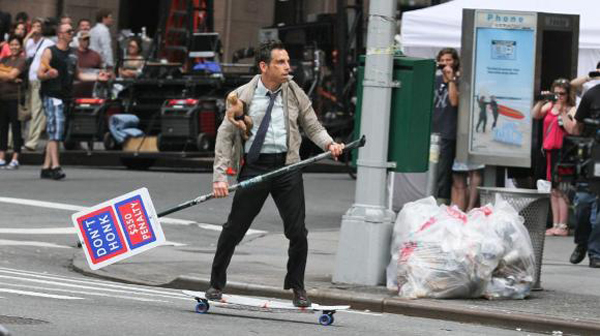 What are the 3 Longboard Skateboards used by Ben Stiller in The Secret Life of Walter Mitty?

I have emailed customer service at Gravity Skateboards, Bustin Boards, Land Yachtz, and M Longboard Industry, but have yet to get a response about if any of their longboard skateboards were used in the Walter Mitty movie. However, both the movie and Bustin Boards are located in New York City so there’s a high probability that the movie used a local company. Gravity Skateboards are out of California, Land Yaachtz are out of Vancouver, BC, and M Longboard Industry is out of France.

If you have information about what longboard skateboard was used by Ben Stiller in the 2013 Secret Life of Walter Mitty Film, please let me know in the comments below or on Twitter.

Matt at M Longboard Industry Matt points to this Rad Train article as evidence that Ben Stiller used Dregs Skateboards. I can’t find any hard evidence of that, nor can I find the original Concrete Wave Magazine article that supports it, but I will admit that the Dregs Blade Crest longboard does look a lot like the one used in the film. Josh Dickey, managing editor at The Wrap, said on Twitter that the downhill scene in Greenland features a LandYachts Wolf Shark longboard.

WALTER MITTY trailer unmoved me until I saw he's LONGBOARD DOWNHILLING on a LandYachts Wolf Shark (my bombing deck)! pic.twitter.com/3QNWoEdN1i

If you’ve seen the movie and know what skateboard Rich is using in the park or think you have a different explanation for the longboard used, please let us know in the comments. Thanks!