Jonathan Davis and His Dream of Doing Nothing

Whenever anyone asked Jonathan Davis what he’d like to do or what he’d like to be, the answer was always the same, “Nothing.” But instead Jonathan would make up something just to satisfy the inquirer like, “watch TV,” “eat”, or “work in the air conditioning somewhere they have a dress code policy.” 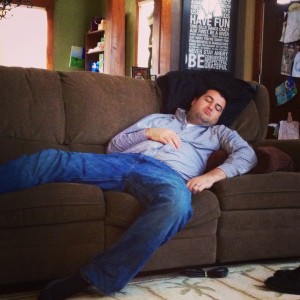 It’s been said that a man will hit whatever he aims for, but so far Jonathan had never achieved his dream of doing nothing. So he quit.

All of a sudden there was nothing to do so Jonathan began going on walks. On one particular walk he saw a man unloading wood from his truck. The man seemed like he could use some help, but Jonathan did not dare to ask. He was afraid the man might hire him.

At home Jonathan would watch movies. He studied them with fervor the way a producer looks for inspiration on his next film. He used to make films, but it did not fit into his goal of doing nothing, so he quit.

One day while walking to the Mexican restaurant he saw a poster for an upcoming concert. He remembered when he used to be in a band and how they decided to break up, each member going five completely separate ways as if they had to get as far away from each other as possible.

The guitar sat unplaced in it’s case against the wall. One day Jonathan picked it up to play and noticed how much it hurt his fingers. “No matter,” he said to himself. “Playing guitar is not doing nothing.”

One day Jonathan met a girl who said she could help him achieve his goal of doing nothing. She said she’d make his meals, do his laundry, and drive him to the Mexican restaurant. Jonathan loved chips and salsa so he married her.

But Jonathan’s new wife also had a dream of doing nothing and wanted instead for Jonathan to do something about it. So Jonathan went to the man with the wood and he asked him for a job. “You didn’t help me when I needed you the most, why would I hire you now?”, he replied.

So Jonathan went to his band mates (who all had been working) to ask if they had any openings. They all said, “Man, I don’t know you,” and closed the door in his face. “Strange how the door only opened from one side,” he thought.

So he went home to his wife who was watching TV with dirty laundry spread around her feet. She asked what was for dinner and Jonathan replied, “Nothing.” He picked up his guitar and began to write a song, but nothing came to him. His belly was empty and his brain was blank. He looked at his wife and his heart, it did sank. He realized he’d achieved his life’s goal of nothing, but he didn’t realize how this goal would be such a rough thing.

He stood up determined that this day was different. He made up his mind to live his life more fervent. He’d set up a goal and he’d stick his mind to it. He’d focus and overcome hurdles to do it. Nothing could stop him as long as he stayed strong. He would write a pop hit, it would be the most played song.

“On my own, I see the world behind me,” he sang, “Now I know the path that is before me. I love her, I’ll stand up straight beside her, and when I see my fate I’ll never leave her.”