In August of 2009 I wrote about how I couldn’t afford to let my child choose whatever candy they wanted from the gas station because I literally only had less than $2. All of our credit cards were maxed out and we could barely make the minimum payments. It forced us to become used to living within our means after living outside of them for so long, but our troubles were far from over. In fact they were only just beginning.

“I went to bed [that] night thinking about my experience earlier in the day with my daughter at the gas station. We walked there to get my wife a coke, but had some ‘extra’ money to get her some candy. When we walked through the candy aisle, she started looking at the bags of candy on the left and I looked at the money I had. I had to bend down and tell her that she could only look on the other side of the aisle, in a section in which I could afford to buy her something. In bed that night I started thinking how much more awful it would be to do similar things in the future to clothes she’ll want to buy, trips she’ll want to go on with friends, etc..

In 3 months I’d be living at a friend’s house in a spare bedroom, and I’d be a month away from losing my house. The tires on my car were so bad no one would change them unless I bought all four at once, which I couldn’t afford. Since they didn’t think my car was safe I didn’t feel comfortable picking my kids up to go anywhere. I ended up selling my wedding ring to fix my car because I didn’t know if my wife would give me any of my money from the paycheck deposited in the bank account she controlled. She blamed me for the state of our marriage, for the mortgage going unpaid, and for her inability to get a job. And she was right. A lot of it was my fault. I chose to go to college, incur huge amounts of debt, get married, have children, buy a car and home I couldn’t afford, and take whatever job came my way. I didn’t have a plan and I wasn’t being a leader. I was a loser and I had lost.

James Altucher wrote in How to Have Great Ideas that, “I lost the first home I bought. I lost all my money. Fifteen million cash. I went to zero. I was literally crying on the floor while my baby was crawling over to me to get to her toys. I couldn’t get a loan of a few hundred dollars just to ensure I could provide diapers and food for the weekend. From my own parents! Nobody trusted me.” And in his book, I Was Blind But Now I See, he wrote, “I would pace at three in the morning. ‘I’m going to lose this house. My kids are going to switch schools. I have three months to live. I’m going to lose this house. I’m going to this and that and this/that.’ The chatter doesn’t stop and it’s nightmarish at three in the morning. And at four, and at five, and it doesn’t stop when the kids wake up and they don’t know anything is different but I cry then because everything is different.” 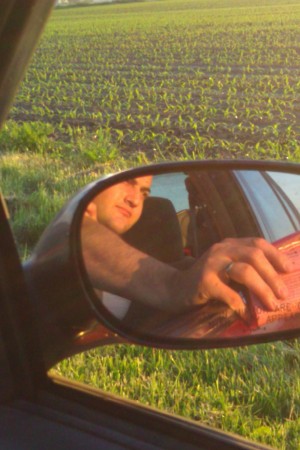 In Everything I Know About Cars I wrote, “Our first son was born the day Lehman Brothers collapsed in 2008 and soon after all of our credit cards were unusable. The banks decided to lower our credit limit to our current balance, rendering them useless. We had foolishly been relying on credit each month to pay our daily expenses, but suddenly we were forced to pay for everything with cash, check, or debit card. We didn’t make enough money at the time to pay our monthly expenses as we had been living outside of our means since before we were married. For the next year I did odd jobs on the side and we cut expenses, but the time came when we couldn’t reduce our expenses any more and we had to raise our income. In the fall of 2009 my wife decided to get a paper route. After running the paper route four months, another route opened up and I applied. I started running the paper route Feb 1 and ran it every morning until November 30. For ten months my wife and I would get up at 3 AM, be at ‘The Shed’ by 3:30 and be done delivering papers by 7:00 in order for me to be at work at my day job by 8:00. I’d get home, change my clothes, and jump back in the car.”

In How to Work a Life of Purpose I reference this period in my life as one of only two times I’ve worked hard to overcome something, “[I] wanted to get caught up on back-mortgage to keep from losing the house so I got up every morning at 3AM for 10 months straight to raise the money. I went through 2 flat tires, 2 visits to the brake shop, and got stuck in the snow twice, but we kept our home,” but I also worked hard to repair our marriage, which has remained strong since.

Working a day job was starting to wear on me and 2 years after writing about the candy aisle I quit my job to run my own business, which I had been building on the side for 4 years. I ran it successfully for another year and a half before calling it quits and going back to a day job. One of my biggest clients hired me on full-time to continue doing what I do best: IT consulting. We are still not using credit cards and I still drive the same car I drove in 2003. I now have four children and another one on the way. I have strong opinions on management and believe that there are big ideas “no one claim yet”. I’m continually looking to the future and am happy to report that even though I can now afford to let my children buy candy from either side of the aisle, that they still only get candy from the right side and the thing that always mattered most was the time we spent together and the love we had for each other.