How the Bible Influenced Star Wars

Mar 24,2013 Comments Off on How the Bible Influenced Star Wars Faith, Star Wars

Since today is Palm Sunday and we are entering into Passion Week leading up to Good Friday and Easter, I wanted to share a small snippet of that story, which may have influenced Star Wars. But even if you don’t care about Star Wars, it’s still a really cool story that shows God’s power.

In this story, Jesus has triumphantly entered Jerusalem on Palm Sunday, met with his 12 Disciples for the Passover, and is now about to be betrayed by Judas, on of his disciples. He has just spent the night praying and is really stressed about what is about to happen next.

Although not exactly a Jedi Force Push, it does seem as if the very act of Jesus saying, “I AM” forced the “band of soldiers and some officers” to fall to the ground. To give you a little back story, a long time ago Moses met with God on a mountain in Exodus 3 and in verses 13-14 Moses asks God his name.

God’s name is divine and has power. When Jesus, the Son of Man, said “I Am He,” there was power in that and the group of men fell down. This could have influenced George Lucas in the development of the Force and it’s capabilities.

Immediately after this scene, Peter, one of Jesus’ disciples tries to defend Jesus with a sword by cutting off the ear of the high priest’s slave. To fully understand the significance of this action, you have to understand that part of Jesus’ plan during his time on Earth was to fulfill prophecy. One of the most blatant preparations for this happens in Luke 22 where Jesus makes sure his disciples have a sword to fulfill prophesy from Isaiah 53:12.

He said to them, “But now let the one who has a moneybag take it, and likewise a knapsack. And let the one who has no sword sell his cloak and buy one. For I tell you that this Scripture must be fulfilled in me: ‘And he was numbered with the transgressors.’ For what is written about me has its fulfillment.” And they said, “Look, Lord, here are two swords.” And he said to them, “It is enough.” -Luke 22:36-38 ESV

Isaiah 53:11-12 (NET) says, “Having suffered, he will reflect on his work, he will be satisfied when he understands what he has done. ‘My servant will acquit many, for he carried their sins. So I will assign him a portion with the multitudes, he will divide the spoils of victory with the powerful, because he willingly submitted to death and was numbered with the rebels, when he lifted up the sin of many and intervened on behalf of the rebels.” And in Luke 22:52, “Then Jesus said to the chief priests and officers of the temple and elders, who had come out against him, “Have you come out as against a robber, with swords and clubs? When I was with you day after day in the temple, you did not lay hands on me. But this is your hour, and the power of darkness.”

George Lucas, the writer and director of Star Wars, is known to have been influenced by Joseph Campbell’s The Hero with a Thousand Faces, which identifies the “Hero’s Journey”, a universal motif of adventure and transformation that runs through virtually all of the world’s mythic traditions. While I believe the Bible to be true, much of Campbell’s “mythic traditions” are taken from the Bible. According to Wikipedia, “George Lucas was the first Hollywood filmmaker to credit Campbell’s influence. Lucas stated following the release of the first Star Wars film in 1977 that its story was shaped, in part, by ideas described in The Hero with a Thousand Faces and other works of Campbell’s…Lucas discusses this influence at great length in the authorized biography of Joseph Campbell, A Fire in the Mind:

I [Lucas] came to the conclusion after American Graffiti that what’s valuable for me is to set standards, not to show people the world the way it is…around the period of this realization…it came to me that there really was no modern use of mythology…The Western was possibly the last generically American fairy tale, telling us about our values. And once the Western disappeared, nothing has ever taken its place. In literature we were going off into science fiction…so that’s when I started doing more strenuous research on fairy tales, folklore, and mythology, and I started reading Joe’s books. Before that I hadn’t read any of Joe’s books…It was very eerie because in reading The Hero with a Thousand Faces I began to realize that my first draft of Star Wars was following classic motifs…so I modified my next draft [of Star Wars] according to what I’d been learning about classical motifs and made it a little bit more consistent…I went on to read ‘The Masks of God’ and many other books.

Wikipedia continues, “It was not until after the completion of the original Star Wars trilogy in 1983, however, that Lucas met Campbell or heard any of his lectures. The 1988 documentary The Power of Myth was filmed at Lucas’ Skywalker Ranch. During his interviews with Bill Moyers, Campbell discusses the way in which Lucas used The Hero’s Journey in the Star Wars films (IV, V, and VI) to re-invent the mythology for the contemporary viewer. Moyers and Lucas filmed an interview 12 years later in 1999 called the Mythology of Star Wars with George Lucas & Bill Moyers to further discuss the impact of Campbell’s work on Lucas’ films.”

Jesus was the ultimate hero because, “For God so loved the world, that he gave his only Son, that whoever believes in him should not perish but have eternal life.” -John 3:16 KJV. But have you heard the good news? Jesus has risen. He overcame death. I don’t know anyone else who has ever done that. It’s pretty unique. And people were so shaken by it that they spent the rest of their lives telling other people about it and even gave up their own lives to continue telling the story. It’s easy to get caught up in the “fun” stories in the Bible about Jedi-like pushes and prophecy being fulfilled, but Paul warns in Collosians 2:18-19 to focus on “the Head” (Jesus), “Let no one disqualify you, insisting on asceticism and worship of angels, going on in detail about visions, puffed up without reason by his sensuous mind, and not holding fast to the Head, from whom the whole body, nourished and knit together through its joints and ligaments, grows with a growth that is from God.”

How to watch Star Wars in Telnet 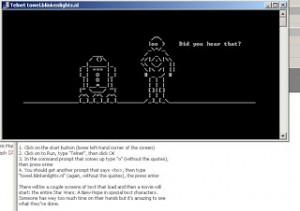 There will be a couple screens of text that load and then a movie will start: the entire Star Wars: A New Hope in special text characters.

Someone has way too much time on their hands but it*s amazing to see what they’ve done.