I have been searching for the name of this triangle-shaped, red seated toy that has a handlebar underneath that you move back and forth to go forward with, but because it existed prior to the Internet, I haven’t been able to find it – until now*.

I was searching for things like, “80s racer red sit toy handbars”, “red sit scooter”, and “red triangle scooter”, but I couldn’t find anything. I knew it was red and sort of a triangular shape. It had handlebars that were attached to the front but curved around to the sides and you put your feet up on the front part of the handlebars while holding the grips that were off to the side. To make it go, you just had to wiggle the handlebar back and forth. I never owned one, but remember seeing the commercials on TV growing up. I later found out they were made by the Mason Corporation and named Roller Racers or Flying Turtles. I’ve also heard them referred to as The Rabbit.

It’s called a “Roller Racer” and Amazon defines it as a scooter. I suppose it is, but it’s not like any other stand-up scooter. You sit very close to the ground and instead of using your feet to push you forward, you have to move the handle bars back and forth, kind of like a snake.

One Amazon commenter said it was good for preschool children with disabilities because even, “Kids with splints or whose legs are too short can ride with their feet on the T-bar connecting the handlebars and, again, enjoy a great ride.”

According to Wikipedia, the Roller Racer was originally sold by WHAM-O brand name, but is now sold by the Mason Corporation and is available on Amazon.

EDIT: I’ve recently setup a whole new website for these ride-on toy scooters with one post dedicated to Roller Racers and Flying Turtles.

Featured in amusement parks and family fun centers around the world, the Original Roller Racer 5000a amusement model is a fun and easy-to-operate kid-powered scooter. Designed for children aged 3 to 12 years old, the Roller Racer provides an unforgettable ride at only two inches off the ground.

To operate, just sit on the injection-molded seat, put your feet on the steel handlebars, and swing from side to side and the scooter zips forward on any hard smooth surface, indoors and out. 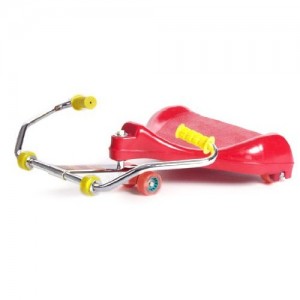 The Original Roller Racer 5000a features the same “rams-horn” design handlebars with buffer wheels as the institutional model.

In addition, the amusement model is equipped with a thicker handlebar, sport grips, and super fast ABEC-3 bearings. The Roller Racer is made in the United States.

Works indoor on carpet, laminate, or hardwood floors and and outside on pavement, basketball or tennis courts – makes a great Christmas or birthday gift. Kids will begin playing with it right away.

*Thanks to Jason for finding this for me. I just emailed him and he found it by doing an image search for “80’s toys.”