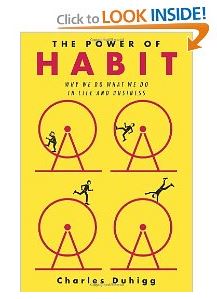 I recently read The Power of Habit: Why We Do What We Do in Life and Business by Charles Duhigg after Zac said, “I have a book recommendation for you, and I won’t take ‘No’ for answer.” It came out in February of 2012 and is both timely and historical in it’s references. There seems to be a bit of bias towards events of the 1980’s, which leads me to believe the author was probably born in the 1960’s. In fact Charles Duhigg was born in 1974 and is a reporter for The New York Times who studied history at Yale and received an MBA from Harvard Business School. The core ideas in this book center around the habit loop, which contains a “cue”, “process”, and “reward.” The scary part is that no one ever really loses a habit – they can be re-instituted at any time with the right cue. The hope is that the middle process can be reprogrammed to take advantage of an existing habit.

Habits are good. We need them to free up our thinking so we’re not always having to figure out how to put our shoes on or brush our teeth. But most of the time you hear about habits is when they refer to something bad. Obviously not all habits are bad and in an organization, they can help employees to do their jobs faster or be used to get along in the “secret hierarchy” that often exists within an organization. When an employee is first hired, their brain hurts because they are having to learn so much information so quickly. This is because nothing they are doing has become a habit yet. This startup area of work has been a focus of mine for a while and so learning more about this process helps me to understand how better to create employee manuals, corporate intranets, and business process design.

One term used over and over again in the book is “organizational habits”, which are like unwritten business processes. My twitter bio says I’m, “an IT business analyst in Indianapolis..I’m a Organizational Development and Leadership Consultant,” and I’m currently working on developing a new company centered around how people and technology work together. The socioeconomic effects of people and technology in business is really my core focus and so this book really intrigued me in several ways. As I learn more about Business Process Management and it’s subsequent tools of business process mapping, monitoring, and engineering, I can’t help but think how to integrate this new type of organizational hierarchy that exists in the form of organizational habits into my field of study.

The Power of Habit references a book called An Evolutionary Theory of Economic Change (1982) by Richard Nelson and Sidney Winter where their central conclusion was that, “Much of firm behavior is best understood as a reflection of general habits and strategic orientations coming from the firm’s past rather than the result of a detailed survey of the remote twigs of the decision tree.” In other words, it may seem like most organizations make rational choices based on deliberate decision making, but that’s not how most companies actually operate. Instead, companies are guided by organizational habits, patterns that emerge from employee’s independent decisions.

Duhigg goes on to give examples of how companies do not act as a single organization moving towards a singular goal of ever-increasing profit, but are more like a group of internally-fighting factions all vying for more power and responsibility. I have seen this with my own eyes while working at two large, regional banks. At each bank, I was not allowed to talk to another department unless I first talked to my supervisor and then the other department’s supervisor. The trouble was hardly ever worth it even though the knowledge transfer may have helped the company as a whole. Although no one died as a result of the lack of internal communication, Duhigg cites examples from Alcoa to a Rhode Island hospital to a London subway where lack of internal communication between workers resulted in deaths. More recently I have witnessed, at one of our biggest clients, people moving offices simply because a bigger one becomes available. What does the size of an office have to do with that employee making the company more money? It has only to do with power and prominence.

Probably the most well known example of failures in intercommunication between departments was highlighted in the aftermath of September 11, 2001. Government agencies were not able to communicate with each other because they either didn’t have the same radios or access to the same databases. They couldn’t talk to each other because before then, they weren’t supposed to. That was the primary reason behind the creation of the Department of Homeland Security and the reason you see new radio towers all over the Interstate System in the United States. But one other suggestion came about after 9/11 that hasn’t came to fruition – at least not how it was proposed. The thought was that maybe big cities were a bad idea and that maybe we should have several smaller cities separated by distinguished, un-populated areas. The idea was that maybe bigger isn’t better. 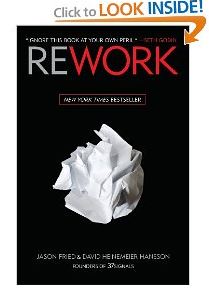 I would argue that companies may be better off to not grow, but to peel off, keeping the groups small, like the smaller, walled off cities suggested after 9/11. Jason Fried and David Heinemeier Hansson certainly argue for this in their book, Rework, which I also recently read and may write about in the future. they believe smaller companies can be better companies because they are more nimble and responsive. It has nothing to do with profitability as a small company can be as profitable or more profitable than a bigger company. Instagram had 13 employees when it was acquired by Facebook for 1 billion dollars. However, even in groups as small as 12, there are still those looking to be the greatest. In the Bible, at the Last Supper when Jesus was telling his 12 disciples that he was about to die, “A dispute also started among them over which of them was to be regarded as the greatest” Luke 22:24.

As I learn more about human behavior I get discouraged that there may not be anything that can be done to change things – for people to think less of themselves and more about each other for everyone’s benefit – but Duhigg offers a possible solution. He states, “Creating successful organizations isn’t just a matter of balancing authority. For an organization to work, leaders must cultivate habits that both create a real and balanced peace and, paradoxically, make it absolutely clear who’s in charge.” The “peace” alluded to here is in response to an earlier claim that businesses act more like they are at civil war with themselves – each division vying for more power and responsibility. And it’s from this truce that is part of the solution as well as making sure that when someone needs to be in charge, there will be someone. In this way, it’s more like business continuity planning where you have event-based hierarchy established before things go wrong so that when they do, everyone knows who is in charge. Daily habits get us by and can help us along, but when the cue, reward, or circumstances change, habits break down and so a clear path to leadership helps at these times. The key is that when the leaders are established for the one-off event, there are trickle-down effects that ripple throughout the whole organization, causing them to be more successful all of the time, not just during special or hectic events. Duhigg calls these “keystone habits”.

In Success by Management I share that The E-Myth Revisited and Good to Great are both excellent books for those wanting to grow or manage large companies, which you can read more information about in 13 Books for Every Entrepreneur. In Goals as a Function of Success, I wrote, “All team members must buy into the goal. If they don’t then they shouldn’t be a team member.” In other words, the company must have a central goal, like Alcoa had when Paul O’Neill championed “SAFETY”, and those that don’t buy into this goal get fired, like the Alcoa executive in Mexico who didn’t report the safety incident. Once a company has a central goal, the processes inside existing habits are changed. The cues and rewards stay the same – only the middle process is changed. You cannot change a habit, you can only change the process inside it. You cannot change a company, you can only change the people inside it. That is because companies are not whole, they are made up of parts – human and technological – and they all have habits and routines. A strong leader + a strong cause + changed processes = a successful organization.

More to the Book 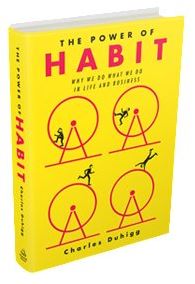 There is much more to this book than business topics and if you are interested in learning about how to lose weight or stop smoking, this book may be beneficial for you too. I took from it what I wanted based on my experiences and my topic of interest, which is human behavior in business and how technology can be used by these people to make more successful organizations. It also talks about how habits are used in advertising, which helped me learn things like how suds are not really necessary in toothpaste, shampoo, or laundry detergent, but they are the “reward” people are looking for in a habit and if you don’t learn anything else, just remember that all habits have a cue, process, and reward and that you can’t change the habit, but you can change the process in the middle by hijacking either the cue or the reward.