Pebble Watch has Hands-Free Applications for Dentists and Doctors

While the Pebble Kickstarter campaign ended with much fanfare on May 18, 2012, as of March 18, 2013 you still can’t get a Pebble watch. But that’s not why I’m writing. I know the Pebble watch will eventually come out by either Pebble or some other company so I’m writing to explain how this watch could be helpful to doctors. 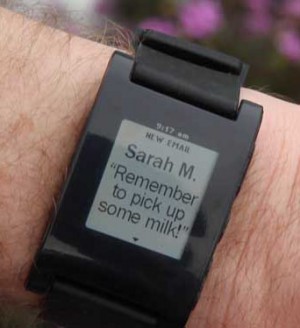 According to their website, Pebble watches have “notifications, messages and alerts,” for:

It’s not just for active individuals or sly students, this is perfect for doctors and dentists who can’t stop to scrub off again after checking their phone or pager. This is similar to the reason Bluetooth technology was developed for Windows authentication – doctors no longer have to press CTRL+ALT+DEL and enter their username and password every time they walk up to a computer. As long as they have their Bluetooth-enabled device, the computer automatically logs them on. It uses a Bluetooth protocol for wireless sensor authentication that is HIPAA-compliant.

Would Pebble watches be HIPAA-compliant? Possibly. A company called MyCareText is already counting on delivering their text messages to doctors wearing Pebble watches and Pebble seems to like their idea. I have to give credit to a dental assistant named Brandon Kollar who works for one of my clients, a local Indianapolis dentist. He wanted to invent a watch that would allow him to get his text messages and Caller ID notifications on a watch via Bluetooth. I didn’t realize this had already been done until I re-watched the video on 3D printing. When I sent him the link, he didn’t reply. He’s always coming up with new ideas so maybe one day he’ll hit on one he can run with – or maybe he can write an app for it.

According to Mashable, the Pebble Watch software development kit (SDK) is coming out in April, 2013. A (SDK) is a set of software development tools that allows for the creation of applications for a certain software package or hardware platform. Mashable writes, “In this initial release, the SDK will be fairly limited; developers won’t yet have access to the accelerometer or communication between watchfaces and smartphones.” Pebble founder Eric Migicovsky said in a Kickstarter post, “I know we have communicated very poorly to developers up until this point, but we hope that you’ll understand how important it was for us and for Pebble as a platform to have the initial release of the hardware go well.” More than 40,000 Pebble watches have been built for it’s initial 70,000 backers and of those, approximately 30,000 have shipped leaving backers waiting over 6 months to get their watches. As one commenter on Hacker News (HN) stated, “From a startup perspective, Pebble is an example of how to ruin an opportunity to build a community around a product offer.” Pebble may have inadvertently created both a new market and an opportunity for Apple to strike.

Another HN post commenter writes, “One thing the Pebble has convinced me of is that smart watches will be a popular product category in the near future. There’s just too much potential, and even my very basic, very early-stage Pebble has already become one of my favorite gadgets.” In case you missed it, Pebble raised over 10 million dollars for a watch that didn’t even exist yet. Pebble wasn’t the first company to develop a smart watch. Sony has the MN2SW SmartWatch and the Ericsson LiveView and Motorola has the MOTOACTV Sports Watch. All three deliver text messages to your watch via Bluetooth from your smart phone, but let’s think for a second. Who is the 800-pound gorilla in the room of mobile devices? When the sleeping giant wakes up to a new revenue source to further tie their dominant platform of iPods, iPhones, and iPads together with a new iWatch, people will be saying “Pebble who?” Apparently this has already happened and Apple will be releasing a smart watch this year (2013). It looks like it will be more like a band with a flexible touchscreen display, but only time will tell.