We’ll work with you to create a comprehensive strategy to marry your business brand, vision, values, products, and services with traditional outdoor, radio, TV, and yellow page advertising alongside social networking and social spaces like Facebook, Twitter, Youtube and other technologies like apps for the iPhone and Android phones.

It’s no longer enough to have a top-ranking website in Google if your web site is not converting traffic, your story is not consistent, and you are not creating lasting relationships with customers. Erich Stauffer can help you to do all three with content marketing.

We are excited to offer social media management to help your business organize and streamline their marketing efforts with a consistent message that is in-line with their mission, vision, and values. We believe so strongly about this product that we would be happy to take you out to lunch to show you how it works in a one-on-one session. Are you interested in learning more?

Last night I had a dream that I went to a restaurant with a couple of friends and we all ordered a strawberry cake pie.  It was served in a “taco salad”-like pan with a friendship bread, cake-like base.  The topping was similar to a strawberry pie, but the kind with strawberry glaze mixed in.  That was our meal.

In the morning I called my friend on the way to work and he thought the idea was fantastic, but then he took it to the next level.  He said, “Why not take strawberry cake mix, churn cold butter into it, and make that the crust instead.” BRILLIANT and DELICIOUS-sounding.  I’ve got another friend who makes exceptional deserts (such as the 7-layer bar) who is going to do the testing.

During our conversation I had mentioned that I was so excited about the strawberry cake pie that I had posted it to Facebook first thing in the morning.  This led to a discussion about a recent Facebook “analysis” I had done on this friend’s Facebook profile.  I had noticed that his wall posts were down compared to a month ago so I mentioned that his Facebook wall posts were down 83% compared to last month.  I hadn’t really done the analysis, but he thought I had, which made me think that Facebook is ripe for analysis.

A while back a different friend of mine did a quick study to find out how many wall posts one of his friends made before and after a point in time. He was able to go back through all of his wall posts to discover that, even though they had been Facebook friends, before the event there were no wall posts, but after the event, the wall posts were near-spam levels.  The metric in that analysis was wall posts, which inspired me to use the same metric for what I call the Facebook Coefficient. 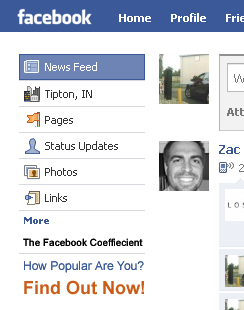 The coefficient can be computed manually, but would best be done by a Facebook App.  I am a member of the Facebook Developers community, but I have yet to produce a Facebook app.  This is in part because I never had a need to or an idea of what Facebook app to write.  If you are a developer, feel free to use or adapt this idea.  I would be interested in using it.  For more ideas, check out this blog post about wanting Facebook Statistics.

What Facebook apps would you like to see? On May 19th, 2009 I posted about using Twitter as a business research tool. If you are a Facebook developer I would consider doing something similar.  Here’s why: the following two wishes have been granted.

WISH there was a way to permanently hide any news feed info relating to those “What kind of blah blah are you” quizzes on facebook.

wish there was a way to opt out of getting messages from some people in facebook. Seems like whey need a spam filter.

But this one still has not:

So if you are a developer who wishes to develop a popularity app like The Facebook Coefficient, then you may have already developed Popularity.  Popularity is a, “fun and rewarding ranking game that calculates how interactive people are with Facebook, Twitter, MySpace, YouTube and Flickr,” but when you try to use it on Facebook it errors out and says

There are still a few kinks Facebook and the makers of Popularity are trying to iron out. We appreciate your patience as we try to fix these issues. Your problem has been logged – if it persists, please come back in a few days. Thanks!

You may have heard the expression, “There is no such thing as competition.”  No matter how good of an idea you have, if you can’t execute it, then it is not worth much.  Execution is really the name of the game and whether you are baking a strawberry cake pie or a Facebook app, you must deliver the goods – otherwise, it’s just a half-baked idea.

Currently there are many social websites that have created a platform for you to speak directly to and with your current and future customers.  There are also many tools that help manage this relationship, pushing the same content out to all platforms at once, or changing it slightly using built in rules.  There are no hard and fast rules for the Web 2.0 landscape because it is all still so new, but what we can do is look to those businesses who are having success in these new areas.

We measure success by the three methods, “know, trust, buy.”:

Blasting your message out to one or as many social media sites as you can will help get your brand more noticed, and so achieve more awareness, but you also need to be genuine.  The best Internet marketers make sure to engage with the customer and not just try to sell them something at every turn.  The medium lends itself to this sort of engagement and turning down the opportunity to do so may break the trust, or the brand favorableness.  Once you have established both the know and the trust, then the customer feels free to buy from you, but there is value to both brand awareness and brand favorableness even if the one who you are impressing does not buy.  Once the goodwill is out there, the person you engaged with may refer you to someone else.  Like the butterfly flapping it’s wings, even the smallest twit on Twitter may lead to a hurricane sale on the other side of the world.