Webories, a web directories web site, has a post entitled “Top 5 Hosted Micro-Blogging Publishing Services”, but one web site they missed was Weebly. 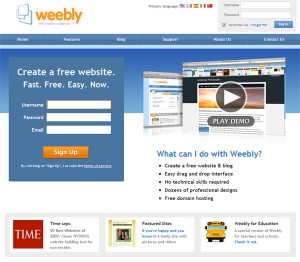 Weebly is a San Francisco, California based company that was founded in 2006 with the mission to help people put their information online quickly and easily. It now enables 3 million people to easily create personal sites and blogs or establish web presences for businesses, weddings, classrooms, churches, or artistic portfolios – just to name a few examples.

In early 2007, the Weebly founding team joined a seed funding program called Y Combinator and began working full-time to make the Weebly service spectacular. Weebly was named one of TIME’s 50 Best Websites of 2007 under Web Services, and they have continued to improve Weebly’s feature set and ease of use ever since.

Amescreative says, “Weebly is in a class by itself in many ways since it allows you to build a true website, and not just a blog, but it’s drag and drop interface can be confusing and frustrating for some. It however offers a lot of customization options if you are a programmer or going to use one to customize your site,” and goes on to compare with Tumblr, which was mentioned by Webories, “Tumblr offers a good mix with extreme ease of use for novices along with easy customization options for programmers or designers looking at it for the first time. Tumblr’s balance between these two important aspects are what make me recommend it as the best solution in most instances. If you want a more complete site, go with Weebly, and if you want to do it all yourself as a novice WordPress might be a good choice, but Tumblr is easier to use that WordPress in my opinion and while not doing everything that Weebly does, gets close.”

This list of microblogging social networks is listed alphabetically and includes their availability, rank, popularity, and features.

Jaiku is a social networking, microblogging and lifestreaming service comparable to Twitter. Jaiku was founded in February, 2006 by Jyri Engeström and Petteri Koponen from Finland and opened in July, 2006. Based out of Helsinki, Jaiku was purchased by Google on October 9, 2007.

The founders of Jaiku chose the name because the posts on Jaiku resemble Japanese haiku. Also, the indigenous Sami people of Finland have traditionally shared stories by singing joiks. On January 14, 2009 Google announced that it would be open-sourcing the product, but would, “No longer actively develop the Jaiku codebase,” leaving development to a, “Passionate volunteer team of Googlers”.
END_OF_DOCUMENT_TOKEN_TO_BE_REPLACED

Going Off the Grid

Now that I have used my HTC Hero I realize that I am more plugged in than I have ever been. Not only is data being collected on me from phone, email, and Internet use, but I am freely giving up more information on Facebook, Twitter, and Tumblr. But I wasn’t satisfied with the amount of data being collected so started collecting more data using Endomondo and Facebook apps on my GPS-enabled phone, the HTC Hero for Sprint. Every since I got this phone with unlimited Internet access, I have been more plugged in than ever before. The New York Times has a great article on this called The Data-Driven Life. My friends have started to comment on the uptick in wall posts on Facebook and I’ve started to get caught back up on email, but I’ve also increased my risk.

Now, more than ever I use my phone while driving. If texting makes you 8 times more likely to get on an accident, what is the odds for someone filming and posting videos to YouTube from the road? There is also the minor strain on the wrists from using the mobile device more and in more situations.

Because my phone has always-on Internet access and unlimited text messaging there is nothing to stop me from using the phone at work. Checking Facebook is an issue that I have found that I have and texting with my wife can happen a lot depending on what she is doing that day. The bible says to be a slave to your master; serve your employer well while you are at your job. Being a good steward of your time is part of that.

So now that I’m in, am I wishing I was out? I do like the new features of the phone like weather information, Facebook access, and the qwerty touchscreen, but its just another thing in my life I have to maintain and manage. Like this site, I need to learn to better manage my actions while driving and while at work so I don’t get forced off the grid.