Dentist’s web sites have become increasingly more advanced and colorful as competition increases and more dentists are fighting for the same number of patients. Indiana has one of the highest distribution of dentists in the nation and so competition for top Google rankings for the most popular search term, “Indianapolis dentist,” is an ongoing battle. Once the dentist’s website makes it to the first page of Google, then it also has to look good to attract patients. That is what we are discussing today – how spa dentistry, dental studios, and sedation dentistry are hot design and service elements used in dentistry web design. 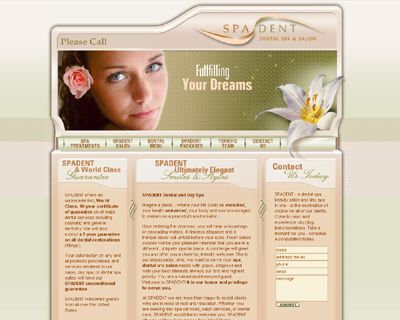 Spa Dent plays on the dentist-office-as-spa genre and uses the white flower as an accent. It features crown molding features around the outside edges, giving it a unique web design. The frame of the site is beveled with a drop shadow. The background has a mixture of solid colors and textures. The call to action is the contact box on the middle-right, exactly where it should be. 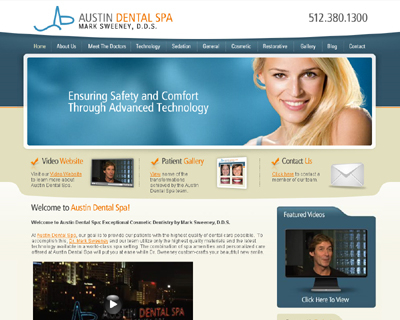 Austin Dental Spa uses long-arc graphic backgrounds and a kind of half-file folder tab, half-crown molding graphic outline to the web design. The arc is centered behind the main page and continues on out no matter how wide your monitor is. The blue and white colors remind the patient of a medical environment, but the khakis and oranges warm the site up to make it more spa-like. The bending lines in khaki are probably more intended to by file-folder tabs than crown molding once you view the featured video, which definitely features the file-folder tab top. The call to action here is the contact us area, which instead of a form like Spa Dent, requires the user to click on the nice envelope icon. 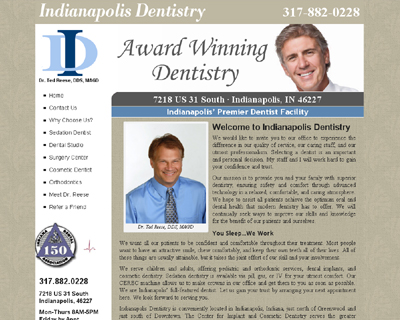 This site has a textured background with a mix of solid and textured backgrounds inside the main content of the page. This Indianapolis dentist‘s web site features a flash banner, much like Spa Dent’s and Austin Dental Spa. Indianapolis Dentistry is a dental spa and dental studio which uses sedation dentistry. It encompasses all three of the major trends in dental web sites today. The call to action on this website is generally missing, so I would suggest adding a button or graphic somewhere in the middle-right asking the user to “Make an appointment by calling…” or something along those lines. I like the mix of grays, khakis, blues, and whites in this web site. It is clean and well put together. 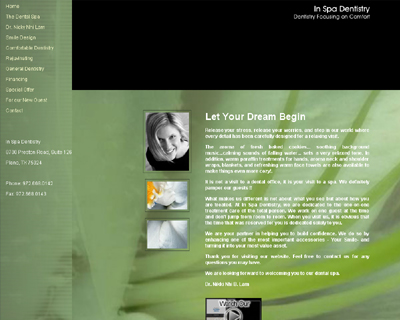 In Spa Dentistry features a nice green background with a black text background, but the site is made to expand to fit your window, which changes the positioning of the contents of the page and generally stretches things out unless the user is still using an 800×600 resolution. I don’t particularly care for the design, but wanted to include it for comparison against the next two dental web sites which use either green or black backgrounds. Like Indianapolis Dentistry, this website has no real call to action. And like Spa Dent, this dental web site also makes use of the white flower with the yellow stamen. 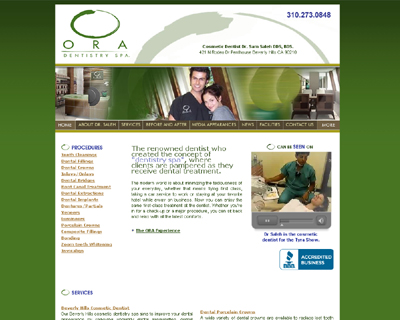 Ora Dentistry’s web site is more of what you would have found circa 2003 on the web. It’s got the video, the structure, the flash, but it’s all very old looking. It seems like it hasn’t been refreshed in a while, even though it may have been. Sometimes web designers can get stuck doing something the same way because it has worked for them in the past. This may or may not be the case, but in general the flash animation is a bit fuzzy. If Ora didn’t have all the movie stars appearing on the web site, he may not have had as much success on the design alone. There is no real call to action, but it does seem like the designer wants us to watch the movie. Perhaps the call to action lies within the video. 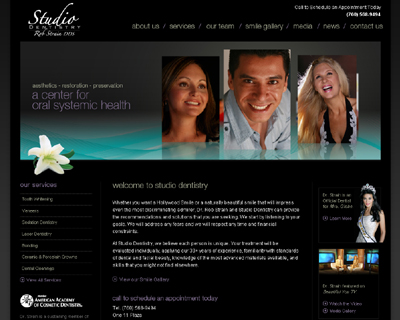 Studio Dental is a dental studio, like Indianapolis Dentistry, and also features a flash banner as well as the white flower with the yellow stamen. It has a piano-black background on top of a gray background, which really makes the site pop. This is a really classy design which lines up the pages across the top and the services along the left side. For those who just want to know the location or the hours, that is along the top and for those who want to know what is going on in that location, that information is down along the left-side. The web site if littered with attractive women, even featuring Mrs. Globe, so like Ora Dentistry, famous people don’t seem to hurt your business much, but unlike Ora Dentistry’s web site, this one is very nicely done. The call to action is to “call to make an appointment”, but it is located in the middle-center, which is not the prime location. It should be moved to the right – in between Mrs. Globe and the video featuring his guest appearance on TV.