What is a normalized database?

Database normalization is the process of organizing the fields and tables of a relational database to minimize redundancy. Normalization usually involves dividing large tables into smaller (and less redundant) tables and defining relationships between them.

What is a SQL union/join?

Unions combine rows. Joins combine columns. UNION combines the results of two or more queries into a single result set that includes all the rows that belong to all queries in the union. By using JOINs, you can retrieve data from two or more tables based on logical relationships between the tables. Joins indicate how SQL should use data from one table to select the rows in another table.The UNION operation is different from using JOINs that combine columns from two tables.

What is SQL locking?

How to open the Performance Monitor?

On a Windows computer, click Start, click in the Search box, type perfmon.msc, and then press ENTER. In the navigation tree, expand Monitoring Tools, and then click Performance Monitor.

What does the Performance Monitor do?

Here are the key counters to watch on a regular basis:

In part 3 I continue building on the table structure I learned about in part 2 of my training on How to Use Microsoft SQL by learning about creating custom views.

To learn how to setup a custom view in Microsoft SQL, we setup a second table so that we could join the data together. If you know Excel, then a good comparison is “Lists”, which are a separate table that can be referenced for a single cell. The second table shares a column name with the first table and it’s used to create a ‘list’ of sorts for the data in the first table.

Once the second table has been created, we right-clicked on each table and selected “Edit Top 200 Rows” so we could populate it with some data. Microsoft SQL creates little red circles with white exclamation points when you’re entering data. This is meant to show you that the data isn’t saved. Clicking the red exclamation point in the top menu will save the data. ‘Grayed out’ data is read-only.

Right-clicking on the database and choosing, “New View” will bring up a box that prompts you to choose a table (or tables) or click “Close”. Once you’ve selected your table(s), click close to view the View. A view is it’s own object in the database so it can be saved separately and referenced in other SQL code later on. Once a View is created, it can be edited.

Along the top menu are different views that display the same data in different ways. One box brings up a visual view of the tables where you can draw lines between them. These lines are called “joins” and are simply visual representations of code, which can be viewed in a separate window. Unlike other programs, multiple views can be viewed at once. If you’ve ever used Access, you may be familiar with the screen where you can draw lines between tables. Microsoft SQL works similarly. Like in Access, the bold rows are the primary keys.

Each row can be selected to appear or not appear in the view. This creates a corresponding “SELECT” statement in the SQL code. The “Alias” column adds a ‘nice name’ to the data to help you distinguish it later on. The “Output” column further distinguishes whether or not to display the data. “Sort Type” and “Sort Order” are used to sort the views and “Filter” is used to filter what data is displayed.

The View is its own object so it can be saved just like a table. To keep the object straight in your mind when coding, it’s best practice to append the View name with “vw” like this: vw[ViewName].

I’m in the process of learning SQL and in so doing have started learning Microsoft SQL using Microsoft’s SQL Management Studio. It’s a free program that’s used to open, manage, and edit Microsoft SQL databases stored on a server running Microsoft SQL (quick note: SQL is a database language used to store data in tables that can be accessed from programs or websites). 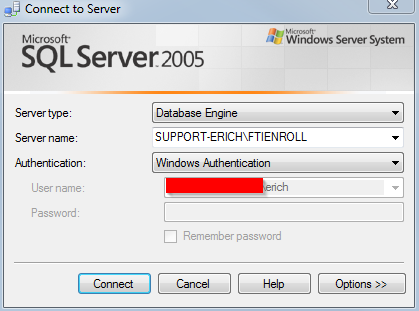 The places you’ll be working in the most are under the “Database” folder: Tables, Views, and Programmability > Stored Procedures. For this post I will be focusing on Tables and specifically, creating Primary Keys.

To create a table, right-click on the Tables folder and select “New Table”. SQL will automatically append a “.dbo” to the front of the table name, but to keep things clear later on, add your own “tbl” or something similar to the beginning of a table name.

Once you have created a table, create a new column to use as a primary key, then change the type to INT for integer. This will create a way to identify rows that are unique to the table, which allows all sorts of other functions to work correctly later on.