Aug 13,2013 Comments Off on How I Lost 40 Pounds in 4 Months Using Slow-Carb Ideas from The 4-Hour Body Sandwiches, Tracking 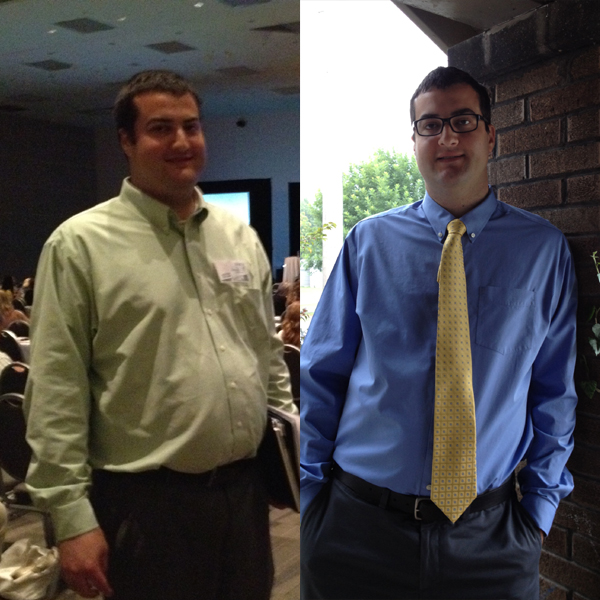 While The 4-Hour Body came out on December 14, 2010, I didn’t start applying it’s principals until April of 2013. The first thing I did was to stop drinking coke (Coca Cola, Cherry Coke, and Mountain Dew). This alone helped me drop 10 pounds. I initially switched to sweet tea, then half sweet/half unsweetened, and then to only unsweetened tea. When I go to Starbucks, which is often, I get either a plain black iced coffee or a plain black Americano (espresso with water) for a hot drink. All other drinks are water. I drink a cold glass of water every morning, which is discussed in the book as a way to kick start your metabolism (along with using coconut oil).

One of the hardest things I found was knowing what to eat at any given time. I really just wanted someone to hand me a menu and tell me what to eat so I didn’t have to think about it all the time. Before I started this diet food was very important to me. I thought about it all the time. I was always wondering what I’d be eating for the next meal. I’d fantasize about it. I even dreamed of owning my own restaurant so that I could serve myself anything I wanted at any time. I was fat.

One of the things Tim Ferriss (author) talks about in The Four-Hour Body is that in order to lose weight we need to break the emotional connection we have to food. We need to stop looking forward to it and start getting it over with as fast as possible. Ferriss recommends eating the same things over and over and being very utilitarian about the eating experience. This idea helped propel me forward.

Slow Carb vs. No Carb

The diet in 4-Hour Body is a low-carb diet for 6 days a week followed by 1 “carb day” of eating as many carbs as you want. There are many foods that contain carbs, but what Ferriss is really talking about is breads, potatoes, corn, and rice, which all contain simple carbohydrates (sugars) that prevent your body from burning fat (by burning sugar instead).

This is a menu I used and continue to use today. It involves eating low-carb meals for 6 days a week followed by 1 day of eating whatever you want.

Drink a cold glass of water as soon as you wake up and then choose from this menu:

Kudos and shout-out to my kid’s mom who used to make these meals for me.

It wasn’t just the diet that had to change, there are other contributing factors to weight loss such as exercise and tracking.

I didn’t join a gym or anything, but I did go on the occasional long walk and the job I had at the time required me to walk up and down stairs a lot carrying computer equipment around. But this wasn’t all the time, maybe once a week. Most other times I was sitting down in the car (I have a one-hour commute – one way, twice a day) or sitting down at a computer chair (much as I’m doing right now). When I get home at least one of my kids will want me to do “big jumps” by repetitively lifting them up in the air or play the “broken crane” where I lift them up making engine noises until the engine gives out and drops them.

In the beginning of the diet change I felt weak, like I couldn’t exercise if I wanted to. This lasted for about 3 months, but by the fourth month I felt I could start doing things like push ups and running again. Prior to the diet change I would run and do push-ups, but I wouldn’t lose any weight. How could I when I was putting so much sugar into my body? It was much easier to burn the “easy” sugar than for my body to take the time and energy to release and use the fat it had stored up.

Don’t have time to exercise? Consider exercising at work.

My first goal was to lose 1 pound. I know that may sound silly, but my weight was so consistent that even losing 1 pound would tell me that I was doing something differently. Once I lost 1 pound I set a new goal of losing 5 pounds. After 5 pounds I set a goal weight of 240. After hitting 240 I sat my eyes on 220, which is how much I weighed in college (I weighed 180 in high school – by the way, I’m 6′ 5″). I haven’t reached that goal, but like I said before the closest I’ve came is 228.

How are you going to handle setbacks? When you weigh yourself everyday, you’re going to have days where you way more than the day before. This could be because you need to go to the bathroom or because you didn’t drink enough water the day before and are now holding onto it (it could also be from holding water from salt intake). It could also be because you just had a carb-day or because you slipped up or decided to take a break. Whatever the reasons, what matters most is that you keep going and get back on track. Mistakes happen – we’re human – but we don’t have to let our mistakes derail us from our goals of being healthier and looking better for our loved ones.

I use a normal, tempered glass, bath scale, but some people who practice quantified self or that just like technology like using the Fitbit Aria Wi-Fi Smart Scale because it wirelessly sends the weight recording to a Fitbit One Wireless Activity Plus Sleep Tracker. Fitbit has it’s own tracking software, which also integrates with MyFitnessPal, which I do use. Some people track their weight in Excel, Google Docs, or Evernote. Some people go beyond tracking their weight and also track their body mass index (BMI); their chest, belly, and hip circumference; and their total body fat. There are sports centers and various medical facilities that you can contact about getting these measurements.

I am not a doctor. Consult a medical professional before making any changes to your body or diet. I am not giving advice, but merely telling you of my experiences with a particular type of diet and exercise routine that has worked for me. Every person is different.

Any links you see to Amazon are affiliate links, which means that if you click on them and buy something I’ll get a small percentage of whatever you buy. This is no increased cost to you and helps you support informative blog posts like this. Thanks for reading.

I recently wrote about how I typically work and network in Indianapolis and while it started out as a way to discuss how to get the most out of little pieces of the city (what in my mind I call “hacking the day”), it ended up being more about networking and how I spend a typical day in the Carmel, Indiana area. 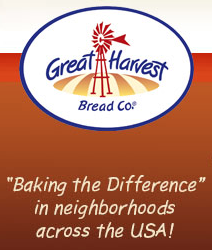 After writing it I ended up telling my friend, Jason, about Jerry at the Great Harvest Bread Company in Carmel, Indiana. Jerry recently joined our BNI group in Carmel, and his business cards can be used to get a free loaf of bread.

They are located next to the Stacked Pickle across from Meijer on Penn and Carmel Dr. They grind their grain each morning and only use natural ingredients.

They want to do catering so Jerry is wanting to come give a groups a free catered lunch as a way to advertise their catering service. If you’re interested, contact:

I recently had lunch at Great Harvest Bread Company and I wanted to share a little bit about the experience. When I first walked in I got greeted by a fresh-baked slice of bread to try while I looked over the menu. Since I had just got back from Tom and Chee’s in Cincinnati, I was still craving a BLT so I ordered a BLT panini. Drinks were self-serve and coffee was available from a pump carafe in three flavors. After a short while, my sandwich was brought to me along with a wrapped pickle spear, which was delicious. 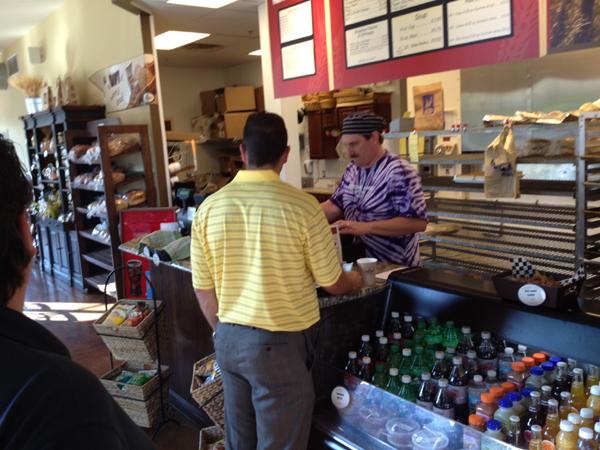 May 24,2006 Comments Off on The Art of Naming a Sandwich Sandwiches

When one goes to name a sandwich, they normally name it after what lies between the slices of bread rather than the bread itself. Conversely, when someone refers to a set of non-food items that resemble a sandwich pattern, the ‘sandwich’ is often named after the ‘bread’ parts. This may be because most of the time, outside of bread, similar things in life do not surround something else, but when it does, one wants to point attention to it, not what is in between and do so by naming the sandwich after the two alike peices rather than the one unique.