Peter Drucker in Innovation and Entrepreneurship: Practice and Principles wrote, “Entrepreneurship, it is commonly believed, is enourmously risky. And indeed, in such highly visible areas of innovation as high tech – micro-computers, for instance, or biogenetics – the casualy rate is high and the chances of success or even of survival seem to be quite low. But why should this be so? The entrepreneur, by definition, shifts resources from areas of low productivity and yield to areas of higher productivity and yield. Of course, there is a risk the entrepreneur may not succeed. But if even moderately successful, the returns should be more than adequate to offset whatever risk there might be. One should thus expect entrepreneurship to be considerably less risky than optimization. Indeed, nothing could be as risky as optimizing resources in areas where the proper and profitable course is innovation, that is, where the opportunities for innovation already exist. Theoretically, entrepreneurship should be the least risky rather than the most risky course.” This is the passage that inspired An Entrepreneurial Mind. 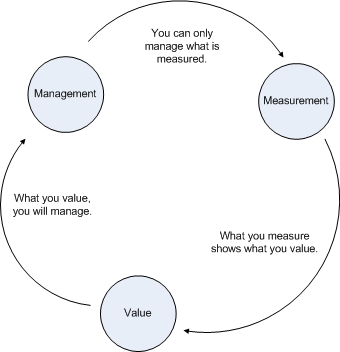 There are many variations of the Law of Focus, but they all stem around a singleness of thought.  In Jeremiah 32:39 The LORD says, “I will give them singleness of heart and action, so that they will always fear me for their own good and the good of their children after them.”  It seems that God supports the idea of focus in order to achieve a desired outcome.  Six Sigma mixes the Law of Focus in with Pareto’s Law stating that 20% of a process causes 80% of the waste.  Six Sigma is about increasing efficiency, but I would like to introduce a Law of Focus that is based on three things: management, measurement, and value.

Every manager managing a department worth his salt collects data of some sort.  This data is usually associated with a predetermined metric of some sort.  A metric is simply a measurement that can reliably compared to another measurement to allow for analysis.  Analysis is in of itself the act of comparing one metric to another.  The manager then uses these measurements to make decisions.  How many errors were there last month versus this month? Why? Production was higher this month than last month? Why? What happened? How can we do this again?

The manager can only manage what he or she is measuring.  If you’ve ever had a boss that cracks down hard on dress code or attendance, he or she is probably not busy actually managing what Peter Drucker calls “social technology”.  They are not innovating, they are only keeping the status quot.  Innovating managers will look for differences in their analysis of the metrics, but they can only create an analysis if they have measurements to begin with.  What you are not measuring you are not managing. Period.

The last leg of this three-legged stool is the glue that holds it all together.  For unless the manager cares about the measurement, he would not ask for it.  And by default, what he or she is not asking to be measured, they are saying that they do not value it.  Regardless or not if this is true, this is how your staff will perceive it.  Have you ever noticed that once a metric begins to be measured, that metric naturally begins to improve over time? This is because the manager is bestowing value on the measurement by asking for it.

Measurement changes things. What you care about you will focus on. What you focus on, you will measure. And because you are measuring it, it will improve. This is the Law of Focus.  I like the way Karl Moore put it, “Intention sets direction.” What you focus your intentions on will grow.  These are universal truths that can help you in your business, your life, or both.

More > If you liked this post, be sure and check out > 4 Steps from Wanting to Receiving…

I went to bed last night thinking about my experience earlier in the day with my daughter at the gas station.  We walked there to get my wife a coke, but had some “extra” money to get her some candy.  When we walked through the candy aisle, she started looking at the bags of candy on the left and I looked at the money I had.  I had to bend down and tell her that she could only look on the other side of the aisle, in a section in which I could afford to buy her something.  In bed that night I started thinking how much more awful it would be to do similar things in the future to clothes she’ll want to buy, trips she’ll want to go on with friends, etc..

All that we have been reading about, hearing about, and preaching about, start doing and acting on it – believing it.  We know it’s true, but I would encourage you to develop the faith.  If I could boil all of our conversations about this down, it would go something like this:

Develop and understand what you want. – Desire, or love, is what keeps you attached or attracted (as in Law of Attraction) to the rest of the steps involved. I would venture to guess that for both of us right now, this desire is to first be able to pay all of our bills monthly, then be able to provide extra for our families.

Believe or train your mind to believe it. – Faith is the next step, bridging the what (desire) and the how.  This is where limiting thoughts from yourself, friends, family, and society creep in, but can be let go through self-talk or mental exercises.  It’s a matter of being acutely aware of your thoughts and managing them towards your stated desires.

Act as if you have already received it. – This means both being thankful for everything you have now, but also what you will have in the future.  It also means acting how you will be after receiving the desire, for example, developing systems and/or routines for paying bills and saving money once the revenue starts coming in, believing that it will and we need to be prepared for it.

Don’t look a gift horse in the mouth. – This adage means to not review a gift before accepting it.  Once you have the desire, have trained your mind to believe it will occur, and have started changing actions to prepare for it’s arrival, the next step is it’s arrival.  Make sure that for more open-ended desires like “more money” you are also open-ended on where you expect the money to come from.

I’ve been listening to an audio version of Peter Drucker’s Innovation and Entrepreneurship book.  In that book, Drucker talks about how entrepreneurship is not about starting a new business, but identifying surprises, incongruities, or miss-assumptions, and then creating something new that shifts resources from an area of lower yield to an area of higher yield.  The reason I bring this up is because sometimes businesses, which are ran by humans with similar brains and emotions to our own, go through this same process.  Some succeed and some fail.  Let me give you an example:

Drucker talks about Macy’s department store in the early 1960’s.  We can assume that the desire of the business was to earn revenue.  They believed that they could and acted as if they had already received the revenue by purchasing buildings, inventory, and machines to process the transactions.  But in the early 1960’s, more revenue started coming from appliance sales than from fashion and for twenty years, managers worked to suppress these appliance sales in order to keep the ratio of fashion-to appliances the same.  Then in the late 1970’s new management embraced the change and despite rampant inflation, Macy’s department stores began beating the market.

Another story is about IBM thinking they would sell equipment only to universities and scientists until one day they were bothered by a woman who complained that she could not get an IBM sales rep to come down to her library to talk to her.  The next morning, the head of IBM walked into that library and closed a deal with enough revenue to cover next month’s payroll.  That was when IBM decided two things: that they would start selling to anybody and start asking for the money up-front.  You see, the original sales rep desired to make a sale, he believed that he could make sales, but when a sale came by that didn’t match his idea of what a sale would look like, he passed it over.

Even I encountered this yesterday while doing micro-niche searches for the Thirty Day Challenge.  I kept coming up with results matching resumes and jobs, but every time, rejected them as not what I was looking for.  Then it dawned on me that what I was looking for should only be classified by the mechanisms and categories that got me there.  As long as it fit the goal (desire) of finding a micro-niche that had over 80 hits a day and less than 30,000 competing websites with phrases that matched mine, I had found what I needed.  To clarify, there are two steps past that (SEO competition review and Monetization) which my brain may have been pre-filtering for, but it’s hard to tell pre-filtering from bias.

Be sure and check out what Zac has to say about this topic in particular in a blog post he wrote back on January 6, 2009 entitled Who Limits Your Success?

More > If you liked this post, be sure and check out > The Law of Focus…