Vacation; The Art of Disengaging

For the last few nights, when I go to sleep at night, I have been dreaming about my day job.  I’ve been helping out with business continuity planning for the last couple of weeks and it’s taken up more time outside of normal business hours than I realized.  It wasn’t until I looked back over the last two weeks to see where the time had gone that I saw how the business continuity planning and events had affected my life.

During the day I am a business analyst.  This means I review, recommend, and maintain various systems.  At night I work as a business consultant providing business solutions to various customers.  When the two jobs start to occupy the same time, two things happen.  One, my stress level goes up and two, a lot less normal activity gets done e.g. mowing the yard, folding laundry, putting away the dishes.

A while back my wife asked if I would accompany her on a business trip to Spring Mill State Park where she would be attending a training seminar.  I was to help her take care of our youngest child of three, who is still breast feeding. What this would mean for me would be watching him at night while she goes and studies in the lobby with her classmates and again during the test on the last day.  The rest of the time would be up to me.

I asked my best friend, who happens to also be my boss, if I could get those three days off.  He said I could, but because of Federal laws I’d actually have to take five days off instead.  I agreed and so starting yesterday, I was officially on vacation.

At first it was hard to disconnect.  I kept thinking about things I had to do at work as a business analyst.  For example, I realized I forgot to set my email and voicemail away messages.  And there were people I had talked to at the business continuity event that I said I would email, but did not have the chance to.  I decided to actively change my thoughts and chose to think about other things, thereby beginning the disengagement from work.

Gaining Control of My Thoughts

It wasn’t until we started driving down to Spring Mill State Park this morning that I started analyzing my thought patterns, only to find that I was focusing on what I didn’t want instead of what I did.  I was creating scenarios in my mind whereby people didn’t like what I was trying to do, did not approve of it, and were actively working against it.  I was looking for ways to spend less time and hide more from those I thought were my enemies only to realize that they were only enemies in my mind – and if I could change my mind, I could change my reality.

In addition, my wife and I decided the night before that I would use the time alone walking the trails to be a one-on-one prayer time with God.  We want prosperity for ourselves, our families, our friends, and our neighbors.  We want to see others succeed.  We wanted to be thankful for all that we had been given: the children, the love we had for each other, the roof over our heads, and the incomes we are blessed to recieve.  We realize that wealth is part of prosperity and actively ask for God to overflow us with the abundance he has created.

This morning, after arriving at the park, I set off on trail 3, which goes by three caves in a loop to and from the Spring Mill Inn.  I would love to be in better shape than what I currently am, but as it is, I was huffing and puffing from step 1 of the trail.  My body learned to adjust and I would say things to myself like, “I am healthy and I am strong,” in order to keep going.  The biting flies were out and so Erich Stauffer, Fly Killa, was brought out of retirement.  Then I remembered what my wife and I had spoke about the night before and I began to pray.

I didn’t close my eyes.  I just walked and talked with God.  When I focused on Him, the flies weren’t around, but when I thought about the flies, the flies came back.  I had an incentive in this regard to keep my eyes on Jesus during my walk.  There was one point early on, about a quarter of the way through when I felt God say to me, “Run! Run as fast as you can!” I ran for about 20 feet then went back to walking and although it was later in the morning, the sky was not brighter.

At the half-way point I was near exhaustion, but there was no turning back now.  I had to go on.  I began singing praise songs, just making something up or singing “Hallelujah” over and over. I was still having trouble controlling my thoughts.  It seemed I could not even take attendance of them as they were jumbling into a ball as dust gathers under a bed.  I could not tell if it was my physical condition causing my lack of thought control or my lack of thought control causing my physical condition.  I decided there was only one that I could change, so I began working on changing my thoughts.

About 3/4ths of the way through I decided to ‘clear the mechanism’ and focus on one thing.  I decided I wanted to see a deer.  I figured this was a reasonable goal/request since it was early morning, I was in the woods, and with one clear thought, it should be easy to attract.  The woods were now getting darker, not lighter.  I remember saying, “Isn’t the morning supposed to get lighter, not darker?”

I continued to walk, looking down at my path, making sure to not trip or misplace my step – and that’s when I had my aha moment.  How could I see a deer when I am not looking for one? I can’t ask to see something, then not look for it, can I? No rational person asks for help, then keeps no lookout for help, do they?  I am reminded, just now, of the story of the man in sinking boat who asks God to save him.  A boat comes by and a sailor asks the man if he needs help, which the man replies, “No, I am waiting on God to save me. This happens two more times until the man finally drowns.  In heaven the man asks God why he didn’t save him and God replies, “I sent three boats!”

So I began to keep my head up, actively looking for the deer I had asked to see, noticing only how dark the forest now seemed. And that’s when I saw it – and heard it – and began to run.

It was a wall of white mist moving through the forest like a smoke monster, but instead of sounding like a New York City cab receipt printer, it was a mix of snapping limbs, heavy rain, and thunder.  I ran as far as I thought I could and finding myself at the top of a ridge with no foliage cover, I ran until I reached cover again, but it was no use.  Even under the trees, the rain was too much and I was drenched.  I began to walk.  Limbs were falling all around me and I remembered what God had told me earlier.  I didn’t run and now I was stuck in a storm.

How I Met Your Mother

By the time I made it to the parking garage, I was soaked.  In two and a half hours Zac would be there.  I felt defeated.  I sat, dripping, in the back of my Vibe with the hatch back open. I wasn’t sure exactly what to do, but over the course of the next 45 minutes I ended up telling the rain to stop, completely changing my clothes, and walked in to eat an all you can eat buffet.  Like Jim Gaffigan says, the bacon tray was at the end and I said to myself, “If I knew you were down here, I would have waited!”

I did wait on my wife – or at least intended to.  After breakfast I was zonked, but we were not yet able to check into the hotel so I went out to the car to sleep.  My wife ended up knocking on the window about a half hour later.  I couldn’t sleep after that so I went to visit the Gus Grissom museum until Zac was to arrive.  I have this thing where I know when to move in order to arrive on time or to meet someone so when I got the feeling, I acted on it.  I was to meet Zac in front of the Spring Mill Inn.  On my way back, I decided to guess what vehicle Zac drove.  I decided it was silver and probably a Jeep.

I parked my car, walked to the front of the Inn, sat down in a rocking chair, and watched as a silver Rendevue pulled into the parking lot and Zac got out (at least I got the color right).  At the same time, my wife stepped out the front door with the keys to our room and together we met Zac by the flag pole.

[NOTE: There is little to no cell phone reception at Spring Mill park, except in one location, around the flag pole.  They call it “flag-pole reception”.  I wondered why so I began to think about why this was.  I looked around and as you can see in this overhead photo, the entrance to the inn is like a parabola with the flag pole being the focus, thereby magnifying any signals enough to talk around the flag pole.] 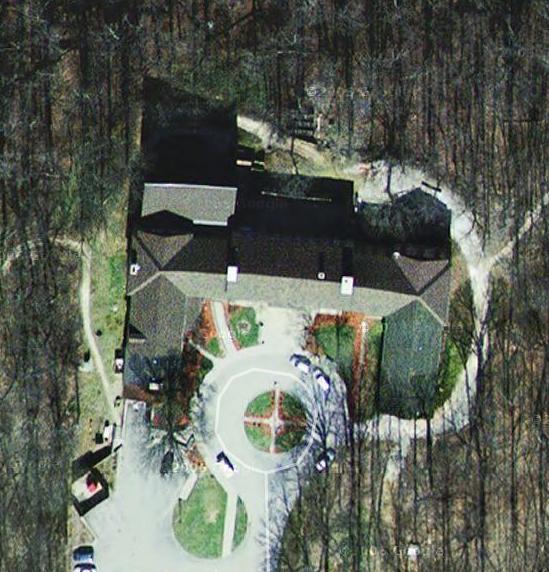 Zac, my wife, and I sat down for lunch.  One of the things we talked about was how I met my wife.  Last week, a coworker at my day job asked if I watched, “How I Met Your Mother.” I said I never had and he highly recommended it.  This afternoon, Zac also recommended the show.  I feel that this was a show I should be watching so I will be recording it to do DVR when I get home and might even catch up online if possible.

We hiked almost every trail in the park, including the one I had already walked that morning with God.  We talked about thoughts, love, and joy.  By the time we got back to the inn, we were both thirsty.  I had a Mountain Dew and Zac had Cherry Coke.  We watched Amazing Kreskin videos on Youtube until my wife got out of her class.  She handed me the baby and I handed Zac four quarters to play a pinball game.  With the extra lives he was able to play one pinball game for over 15 minutes.  Once my wife got back we went back up to the room and watched more Youtube videos and talked until Zac took off.

It was a good way to spend my birthday.  I now realize that one of my love languages is time spent with people.  That is why I cherish time playing Settlers of Catan or eating a meal with friends or family.  I hope that even if those reading this are in a normal scenario this week that you can still look for God in everyday life.  Be careful what you think and ask for what you want.