May 10,2009 2 Comments on The Last Ride of the Roller Blades Change, exercise, Friends

Last night, an era ended. Maybe a decade too late, but my roller blades were not just out of style, but now, out of commission. A friend and I thought that it would be healthy to get out and exercise in the warm Arizona sun. She brought her roller blades over and talked about how long it had been since she had used them. 5 years? 10 years? Friends was still on the air that time, but that doesn’t narrow it down much.

Regardless, she wasn’t sure how fast she would be and asked me to take it easy on her. As I glided backwards on the asphalt, showing my deft ability on said blades, I promised her that I would not race off ahead and leave her in my dust. In a different way that I meant it…. I was right.

As we turned down the first street, I realized that my bearings had less grease than John Travolta’s IMDB page. Cause for alarm? Maybe to someone unskilled in the ways of the roller blade, but I was confident that I could overcome the extra friction with a little more effort and sweat on my part. I was sort of right. My friend zipped right past me with little effort at all. She looked back at me at every corner like a child would look back at a slow pedaling parent on a bike ride. I just kept plugging along, with lots of effort, and little speed and grace to show for it.

After about a mile, I decided to sit down and examine my wheels directly. They did not look good. 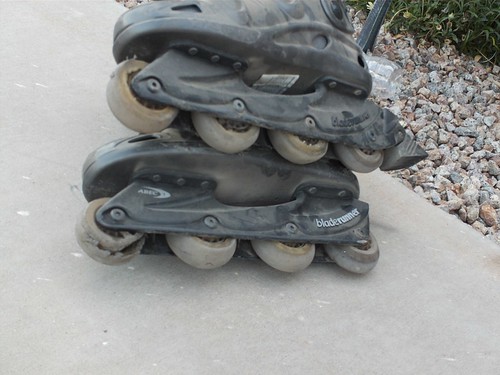 The wheels were actually hot to the touch. I nearly burned myself trying to roll them. On closer examination, the rubber on the wheels had actually begun to disintegrate! 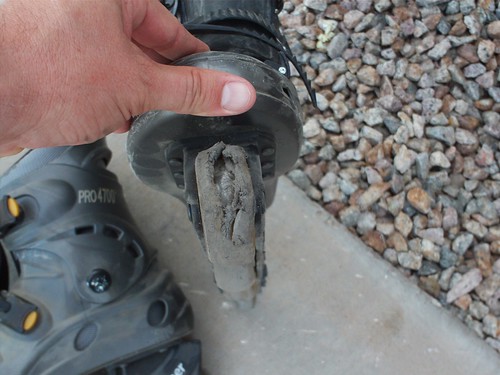 It wasn’t the lack of grease in my bearings at all! The straps were still functioning fine. Even the trendy “Bladerunner” brand could still be seen on the side. But this one piece of my equipment failing was enough to put me out of commission for the day, and possibly for my career.

Have you ever felt like you are putting a great amount of effort into moving forward, you feel the energy being used up, but you aren’t making nearly the progress that you thought you would? Sometimes it can just be one thing that keeps you from moving forward and free-flowing the way that you see those around you doing it, or better. Have you taken the time to look at the inventory of your life and see if one piece is missing or damaged? Success can be that fickle…. or that close to attainment.

For me, I won’t be blading anymore until I get the right wheels. Or maybe I should just figure out a more relevant way to exercise with speed. Any suggestions?