We are witnessing a new paradigm in energy production and usage akin to the transition from gas lamps and candles to electric lightbulbs and public utilities. In the late 1800’s building owners installed coal-powered dynamos in basements to provide electricity to the tenants above. Tomorrow, solar power panels on rooftops will provide power for the people below. Two technologies are coalescing to lead to this outcome: advanced battery storage and solar power production. “A distributed energy future is coming.”

Ramez Naam, computer scientist, futurist, and award-winning author, wrote in April, 2015, “Storage of electricity in large quantities is reaching an inflection point, poised to give a big boost to renewables, to disrupt business models across the electrical industry, and to tap into a market that will eventually top many of tens of billions of dollars per year, and trillions of dollars cumulatively over the coming decades…going from being a novelty, to being suddenly economically extremely sensible. That, in turn, is kicking off a virtuous cycle of new markets opening, new scale, further declining costs, and additional markets opening.”

“Batteries serve as the connecting piece between multiple energy generation sources…Home batteries can recharge nightly during the lowest-demand, lowest-price periods. Then, during the day, a home might run solely from battery power and rooftop solar. If there is an excess of energy available on the battery, the homeowner might even sell some energy back to the grid. The homeowner’s electric vehicle (battery on wheels) also charges overnight, and could sell some excess energy back onto the grid during peak energy usage periods while plugged in at the office,” said Jeremy Welch, cofounder @WeChrg.

In February of 2015, Bloomberg reported on Tesla’s plans for home batteries, stating, “Combining solar panels with large, efficient batteries could allow some homeowners to avoid buying electricity from utilities.” That doesn’t necessarily mean being “off the grid”. There are currently advantages and disadvantages to being on and off the grid.

If your home is still connected to utilities, you are eligible for payment for any energy your home provides back to the grid, but when there is a power outage, your solar panels no longer feed your house. This is to protect line workers who may get shocked from your solar panels backflowing into the lines. However, if you have home batteries those will still work.

Overall I see the trend going toward more solar and less fossil-fuels. The problem with big power plants is that a third of the energy is lost in transmission, but part of the reason we need transmission is because we don’t have good capacitors/batteries. By creating storage capacity at home, we can get power from a variety of sources and be less dependent on just one.

This is one possible scenario: each home/business/car becomes a node like a host on a network. Power can be created and shared between nodes at a metered rate. Cars with solar panels might bring home power to add to their home when they get home. Houses soaking up solar all day might feed their car when they get home. Those still connected to a power company can share out unused power.

“Battery storage and next-generation compressed air are right on the edge of the prices where it becomes profitable to arbitrage shifting electricity prices – filling up batteries with cheap power (from night time sources, abundant wind or solar, or other), and using that stored energy rather than peak priced electricity from natural gas peakers.This arbitrage can happen at either the grid edge (the home or business) or as part of the grid itself. Either way, it taps into a market of potentially 100s of thousands of MWh in the US alone,” said Ramez Naam.

But how expensive will home batteries be? “A widely reported study at Nature Climate Change finds that, since 2005, electric vehicle battery costs have plunged faster than almost anyone projected, and are now below most forecasts for the year 2020…It’s now in the realm of possibility that we’ll see $100 / kwh lithium-ion batteries in electric vehicles by 2020, with some speculating that Tesla’s ‘gigafactory’ will push into sufficient scale to achieve that.”

In Western Australia there are a lot of sunny days, so domestic rooftop solar systems are very commonplace now. In California, companies like SolarCity are installing solar panels and guaranteeing you’ll pay less to them than to your electricity provider.

What utility companies fear is that there will be a tipping point where they the amount of people using solar panels during peak periods will begin to seriously impact their ability to be profitable. As more people go solar, the cost of non-solar is spread amongst the remaining non-solar users and therefore the price goes up. This will only accelerate the move to solar and exacerbate the problem.

It’s likely power utilities will get in the solar installation business, mimicking SolarCity’s model, and figure out the protocols for how cellular power networks are going to work in the future. That’s likely why they have invested (or attempted to invest) in ‘smart meters’ that can send power back and forth, turn appliances off/on, and monitor electricity usage inside the home/business better. This will enable the sharing of electricity between units in a power network more efficiently.

However, solar has it’s drawbacks in extreme situations such as during a fire. Solar panels can be a hazard to firefighting operations because the sun doesn’t have a ‘disconnect’. A collapsed roof may bring a tangle of live electrical parts down into the building and create a hazard that persists long after the fire has been suppressed. For example, when disconnected solar panels are ‘open circuit’ the voltages will rise very rapidly. You can actually arc-weld with two fully illuminated 48V panels in parallel.

While white roof paint is a great way to save energy, sometimes you want to make more energy too. This UL-listed 120-Volt AC solar kit is truly “plug & play”. The 240-Watt “DeckPower120” is designed for ease of use and allows you to simply mount to a deck or outside post with included deck bracket. Simply plug the DeckPower120 into a standard dedicated outside electrical receptacle, and that’s it, no electrician required!

Buy one panel, or buy up to five at any time for up to 1,300 watts of household AC electricity on one circuit! NO costly installation, NO headaches, and NO worries: the “DeckPower120” is a technological breakthrough that offers up to a 50% reduction in wiring requirements by eliminating all DC-side design and installation issues! The deck bracket assembles quickly and attaches to your deck railing as-is with no modification of your deck, and it’s adjustable for a “just right” angle to the sun year round!

DeckPower120 kits are eligible for the 30% Federal tax credit, and additional State tax credits may apply, further reducing your payback time! With SpinRay Energy’s advanced technology, our panels require no maintenance, are easily expandable, and have a 15-year limited warranty. Just sit back and enjoy the lower electric bills! 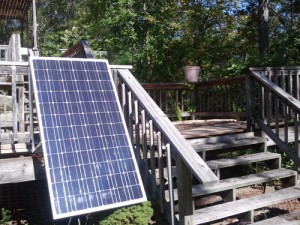 Here’s what one reviewer had to say, “This is a great way to get started in “green” energy. When combined with the SpinRay deck mounting kit this was made for the “do-it-yourselfer”. It took about 30 minutes to unpack the panel and mount it on the home deck railing. The customer designed mount allowed the solar panel to be mounted securely and easily to the deck rail. After mounting, just plugged it into the outdoor deck electrical outlet nand it was creating over 200 watts of power that was feeding into the house electrical system. Just need to find which deck railing direction had the most sun exposure. What is great about the solar power system, is that additional solar panels can be easily added and plugged together and do not require additional outdoor outlets. Really like all the water proof components and electrical connections.”

Another reviewer said, “Well, purchased both the 120 and 240 volt AC panel and kits from SpinRay Energy. I plugged in the 240 watt panel a few days ago and today I did the same to the 120 volt system. Was super easy to get running. I opened the 2 boxes, panel in one and mounting kit in the other. I put the deck mounting kit together and mounted the panel on it. Took about 20 minutes to assemble. After I got it put together I went over to my deck and it easily hooked onto it, AMAZING….lol. Then I plugged it into an outside plug that I use for my hedge trimmer, outside lights, etc. I also purchased a “kill a watt” electrical monitor from them and to check to see if this panel/inverter worked correctly. After 5 minutes of the system getting electricity from the house plug the inverter turned on and started producing about 218 watts, when you unplug the house plug the solar panel stops producing power, just like it supposed to. The system came with UL certifcates that say the solar panel and the inverter are UL approved and listed so I guess nothing is more safe then that. And after plugging in and unplugging a dozen times I feel safe that this system works as advertised.”

White roof paint is different than normal exterior paint. It’s elastomeric, which means that after drying, it resembles rubber, yet resumes its original shape when a deforming force is removed, and it’s reflective. Reflecting the sun’s light and UV rays means it’s also reflecting the sun’s heat – and that is where the cost savings comes into play. The less heat the sun adds to a building, the less electricity it will cost to keep that building cool. And not only does white, reflective, elastomeric roof paint coatings reduce air-conditioning cost and lower roof and interior temperatures, it also seals roofs to prevent leaks.

Most white roof coating paint is acrylic elastomeric resin like liquid rubber, which resists cracking and peeling, and expands and contracts up to 350%. It can be applied with a brush, roller, or via spray application. Different brands of paint have different peel strengths, solids count, solar reflectance values (also known as albedo), and thermal emittance. Premium white coatings reflect 90% or more of the sun’s rays by forming a thick rubber-like blanket of protection and reflection. Albedo solar reflectance is expressed either as a decimal fraction or a percentage. A value of 0 indicates that the surface absorbs all solar radiation, and a value of 1 represents total reflectivity. Thermal emittance is also expressed either as a decimal fraction between 0 and 1, or a percentage.

Another method of evaluating coolness is the solar reflectance index (SRI), which incorporates both solar reflectance and emittance in a single value. SRI quantifies how hot a surface would get relative to standard black and standard white surfaces[citation needed]. It is defined such that a standard black (reflectance 0.05, emittance 0.90) is 0 and a standard white (reflectance 0.80, emittance 0.90) is 100. The use of SRI as a combined measurement of reflectance has been disputed, since it has been shown that two different products with identical SRI numbers can yield significantly different energy savings results depending on what geographic region they are applied in, and the climatic conditions present in this region.