In the summer of 1988, my parents bought a Chevy Suburban and drove our whole family down to Walt Disney World (the only time we ever went). My dad worked for GM at the time and so when we got to the Epcot Center, we got to cut in line to the now closed, World of Motion ride. It was a view of the future. Or should I say, a view of a possible future – one that mostly hasn’t happened – but that’s not what this post is about.

Rebecca Murphey, a JavaScript engineer at Bocoup, wrote in her blog about how her dad bought one of the first personal computers:

“In 1982, Timex came out with the Timex Sinclair TS-1000…the computer, a few times thicker than the original iPad but with about the same footprint, cost $99.95.”

My dad bought one too and I remember having to hook it up to a special data tape player/recorder that acted as the ‘hard drive’. It’s what loaded and recorded changes to programs that displayed on the screen. I remember piecing the parts together and waiting for it to appear on the black and white television screen. We could load BASIC and type in commands, but we didn’t do much more than that. This post isn’t really about my early exposure to technology, it’s more about the man who exposed me to it.

While we didn’t have humanoid robots in our kitchen, we had dishwashers who washed our dishes for us – and a furnace that detected a sudden change in temperature and automatically adjusted accordingly. My dad grew up in a house with no running water. He took a bath in a metal tub in the middle of the kitchen next to the fire-burning stove. He used a Sears catalog for toilet paper in the outhouse out back – yet he was the only person in his class to build an automobile from spare parts. 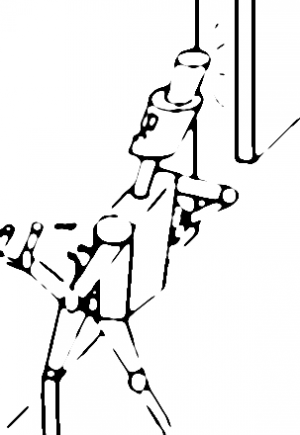 I can only imagine my son re-discovering a vehicle from today, trying to understand this “hard app” (car radio) he found. What is it like growing up with a computer in every room and in every pocket? What is it like to always be on the Internet, always knowing where everyone is and what everyone is doing? What is it like to have your entire childhood documented in status messages, online galleries, and Youtube channels? When I went to high school, we weren’t even allowed to carry beepers.

I can only imagine how no running water, building your own car, learning how to program, and buying one of the first personal computers can shape the way you teach your children about technology. And I can only imagine how growing up with Timex Sinclair TS-1000’s, Atari 2600’s, Nintendo NES’, Windows 3.1, Netscape, Winsock, Windows 95, Nokia Cellphones, College Club, Myspace, and finally Facebook can change how I teach my children about technology. I worry that technology enables too much using and not enough doing. That’s part of what this blog is about – giving back to what I’ve learned from the Internet – and my dad.

Why did CollegeClub.com fail and others succeed?

CollegeClub.com was registered on April 4, 1996 and by 2000 had around 3 million registered users. I was one of those users who used it to find friends at other colleges online. On August 22, 2000, CollegeClub.com announced bankruptcy and said it would be acquired by Student Advantage, an Internet educational content and commerce specialist, for $7 million in cash and 1.5 million shares of its stock. Almost exactly three years later, in August of 2003, MySpace.com launched. Less than a year after that Facebook.com began as a social network for colleges on February 4, 2004, but eventually opened up to the general public on September 26, 2006. What happened to College Club? What made it different from Myspace or Facebook?

Why did MySpace and Facebook succeed when CollegeClub failed?

All of a sudden what seemed so hard for CollegeClub.com to do seemed easy for others. Was it the curse of the “first to market first to fail” concept that’s befell such greats as Palm, Netscape, and Tivo? Or was it something else? EDIT: since writing this initially in September of 2009, MySpace may not be the best comparison, but Facebook is still doing just fine. 11/4/2011.

Lets take a look at the business model. CollegeClub.com allowed users to sign up for free, create profiles, communicate with each other, and post pictures online. Once it attracted a certain number of users, the site was then able to sells advertising to businesses looking to sell to this highly impressionable market with loads of free time and disposable income. Marketers know that if they can hook a customer in college, they may have them for life. Both MySpace.com and Facebook.com used this same model so why did CollegeClub.com fail?

CollegeClub.com was getting funding at the tune of $15 million from a group of investors that included Convergence Partners and France-based Viventures as well as $40 million from Seligman Technology Group via the group’s investment fund and additional money from previous investors Convergence and Sony. Later deals included partnerships with Ericsson and General Motors, with a planned IPO in the offing. The old addage of “it takes money to make money” wasn’t making CollegeClub.com any money. Why?

I have two reasons why I think this site tanked:

The first reason is bad management and the second reason is the high cost of technology at the time.

Infoworld said at the time, “While one source close to the company traces the financial difficulties to some unorthodox spending practices by management, [new owner, Student Advantage] said it believes that problems stemmed from the nature of the site’s business model.” I think Student Advantage was wrong. We now know there was nothing wrong with their business model (because it worked for both Myspace and Facebook) and this next statement from Infoworld backs this up:

In the recent past, Student Advantage has shown less than stellar financial performance itself. Since the beginning of the year, the company’s stock price has plummeted from a high mark of just over $20 to its current price, which is hovering just above $7. In addition, Student Advantage has continually met analysts’ predictions of red ink, and the company has suggested that losses will continue throughout next year.

The company went from bad management to worse management – and technology costs were adding up.

“The business model works.” said Monte Brem, senior vice president of corporate development at CollegeClub in said in 2000 – and he was right – but he noted that with nearly 3 million users, the back-end costs for the site ran high and needed multiple rounds of financing for success. “It requires a tremendous amount of scaling to be profitable,” Brem added. And back then, scaling cost much more than it did in 2003 and 2004 for MySpace and Facebook respectively. Moore’s Law has two effects. Not only does technology double in speed or capacity each year, but the price almost always shrinks by half every two years. For example, a Pentium III desktop PC with 128 MB RAM and a 40 GB hard drive cost $1800.00 in 2000. In 2003, the price of a desktop had dropped below $1000 for over twice the power. Multiply that over all the equipment needed to run a large social network. In April, 2008 Facebook expanded the number of servers it uses to 10,000. The more CollegeClub.com added users, the more technology they had to add on back-end to support the load. Their revenue simply could not overcome their expenses.

So why did CollegeClub.com fail?

Primarily, it was ahead of its time. It had a good idea, but no one had really succeeded with it before. Bad management decisions were made and the implementation of the idea did not match up with the cost of the infrastructure at the time. Had they waited until 2002 to launch, they could have superseded either MySpace or Facebook, but there is another reason why they may never have made it: their name. Names like MySpace and Facebook are not associated with a specific group like CollegeClub.com is. Eventually CollegeClub.com started HighSchool.com to address this problem but even it has the same problem of locking it into a specific group. There were also privacy and age related problems on the site, much like MySpace ran into in 2006 and Facebook has ran into almost every year of it’s existence.

What can we learn from CollegeClub.com?

There are three things they could have done differently:

When You Say Yes but Mean No: How Silencing Conflict Wrecks Relationships and Companies…and What You Can Do About It

In 2003, Leslie Perlow wrote a book called, When You Say Yes but Mean No: How Silencing Conflict Wrecks Relationships and Companies…and What You Can Do About It. In that book, Leslie does a case study on the demise of CollegeClub.com in the chapter, Nine Bad Endings. Pages 141-156 cover the merger with Versity, the talks about the IPO, and the eventual bankruptcy. Overall it’s also a good book on management as one reviewer called it, “A Management Must-Read”.

“Saying yes when you really mean no” is a problem that haunts organizations from startups to big businesses. It exists across industries, levels, and functions and is inflamed by a sour economy, when the fear of losing your job is on everyone’s mind and the idea of allowing conflict to surface or disagreeing with others seems inherently risky. Too often, the conversation at work bespeaks harmony and togetherness, even though passionate disagreements exist beneath the surface. Is this what really happened to CollegeClub.com? Read the book to find out.

CollegeClub was full of so much promise. What happened?

CollegeClub even had email by phone. It was pretty advanced for its time.

CollegeClub “The world’s largest college community”
FREE E-mail you can also hear through the phone!
FREE voicemail, with your own 800 number!
FREE discount card!
FREE Web page builder!
TONS of ways to meet people like you! (Chat, Interest Groups, and more!)
LOTS of other cool stuff! (Including online games and music videos!)

“Oops! Sorry about that! These CollegeClub applications are no longer in service.

If you are trying to access your old emails so that you can forward them on to another address, use this url: http://legacy.collegeclub.com/mail.

This Service will only be available until Friday, March 16th, 2007.

Here is what the email login screen last looked like in March, 2007:

CollegeClub.com Where Are You Now? 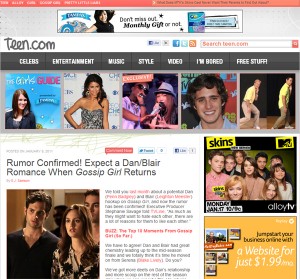 If you type ‘http://www.collegeclub.com‘ into your browser you will be taken to Teen.com, which is, according to their web site the, “ultimate online destination for teens on celebrities, entertainment, music, and fashion.” I think what they mean to say was that they are a ‘destination for teens’ that covers ‘celebrities’, not “teens on celebrities,” which has an entirely different meaning.

Teen.com is owned and operated by Alloy Media, LLC, which is a New York based media company that is partners with Alloy Marketing and Alloy Entertainment. Alloy Media also owns Channel One News, which most know is a 12 minute news program for teens broadcast via satellite to middle schools and high schools across the United States.

The Internet is not a friendly place. Things that don’t stay relevant don’t even get the luxury of leaving ruins. They disappear.” -Facebook’s Little Red Book

For those looking for other ex-CollegeClub.com members, check out ExCollegeClubbers. The ‘tribe’ is “for everyone who wants to meet new friends, but in particular for ex members of Collegeclub.com…It used to be cool like Tribe and we have all lost contact with each other. So non-ex members and ex- members alike are invited to join.”