There are 6 main areas that I check in Google Analytics to get a feel for how a site is performing, where the traffic is coming from, and what the people are interested in.

While some may view these as “vanity metrics”, they give you a baseline comparison month over month and year over year for how your site is trending over time.

To give you some context, a starter site should aim for 200 visitors a month, then 200 a day. A good bounce rate (user visits one page and then leaves) is less than 60%. 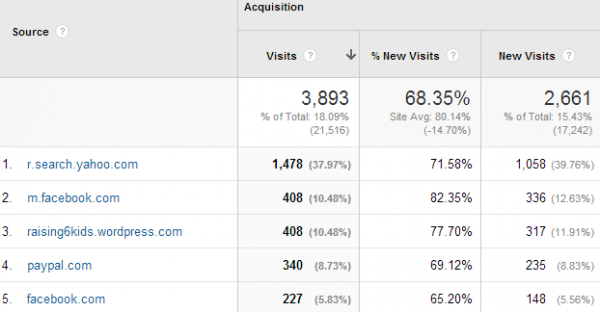 There are multiple views under Acquisition (overview, channels, traffic), but I focus on “All Referrals” as it is the most specific category. It lists specific referring sites.

The other category under Acquisition I review often is “Keywords > Organic”. It can give some insight into what search terms people are using to find the site.

If your top keywords are your brand name, don’t fret. Congratulate yourself. That’s a sign of success. It means people are searching for your brand name specifically.

If your top Organic Keyword is “(not provided)” you can still get the keyword information as long as your site is connected to Google Webmaster Tools.

Under Acquisition > Search Engine Optimization > Queries will tell you the keyword, impressions, clicks, and average position for each search query.

Under Behavior > Site Content > All Pages, Google Analytics lists the top pages on the site by pageview, time on page, and bounce rate.

I use this in combination with the keyword data for content marketing to determine what to write about when creating new blog posts and pages.

If I had a dollar for every time I’ve been told there is too much content I’d have, like $5.

I agree! We need more pictures. Who’s going to take them?

When people say that a website needs less text, what they are really describing is a graphic design problem. They want a zero-entry, spoon-fed, baby-stepped introduction to the content. “Start me off with two-to-three words and a picture. If I like what I see, I’ll keep going.” 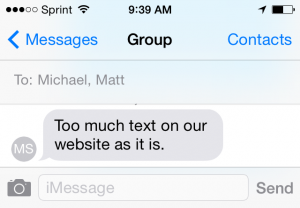 Type text layout is just as important as the pictures used on a website. Large fonts, small fonts, bold fonts, and font spacing can all play towards the readability of a site. A web site can be filled with text and still be readable as long as the text is organized correctly.

Okay, I get websites, but what about Social Media?

This morning one of my managers emailed me a link to Mashable’s Sorry, Marketers, You’re Doing Facebook Wrong. In it the author goes over a recent report that states, “When it comes to posts, less is more,” and “suggests a self-imposed 80-character wall for Facebook posts.” People are so “bombarded” with posts that we need to limit what we’re saying down to 80-character posts in order to get people to like us.

How about we make the posts as long as is appropriate for the material and the medium? For longer posts, consider writing an ebook, white paper, or a long blog post. Longer social posts are socially acceptable on Google+, but not as much on Tumblr or Facebook (Google+ tends to have a more intellectual crowd).

So is a ton of content good or bad? I’m confused.

Imagine if Google had the choice between serving up your 80-character post or your 10,000 word essay. Which one would it choose? The one that answers the question. Google wants to deliver the best results so that people keep using it and so they can keep selling ads. Aim to answer people’s questions (ie. add value) and it doesn’t matter how long your content is.

I didn’t have time to write a short letter, so I wrote a long one instead.” ― Mark Twain

Neil Patel, a content marketing expert, recently wrote How Long Should Each Blog Post Be? In short, he found that the more established a brand is, the less they have to write. Conversely, the less established a brand, the more they have to write. This is how Nike can get away with short taglines in their advertisements, but newcomers have to use long sales letters to convince buyers.

One other aspect to consider is market sophistication levels. At sophistication level 1, no one knows what your product is or what it does. It’s totally unique and so it needs a lot more information written about it. At level 2 there are competitors so you’re only talking about what makes your product different. Each of the 5 levels states less and less about what the product actually does.

A good content marketer will take into account the medium he’s writing for, the target audience, and the market sophistication level of the product when determining how much content is too much content. Blanket statements like “there’s too much text” or “people don’t like to read” are simply not true without context. There is a time and place for all types of content length.

If I were tweeting today I would have wrote: WordPress is not so much a content management system as much as a content display system. 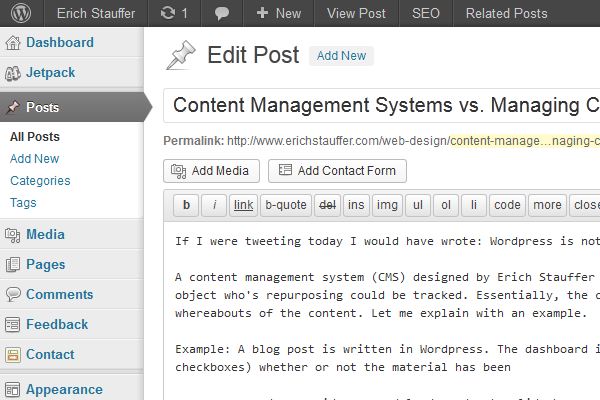 Example: A blog post is written in WordPress. The dashboard in the CMS sees this new post via RSS and prompts the viewer to describe (via checkboxes) whether or not the material has been repurposed as a video, soundcloud, podcast, slideshare presentation, or as part of an email has been backlinked from Twitter, Facebook, and Google+.

In essence, the CMS would work more as a marketing automation workflow tool – guiding you through the process of wringing out as much value from each initial post as possible. This same process could be accomplished via any sort of trusted system: pencil and paper, Word worksheets, Excel spreadsheets, Trello, or even WordPress itself via custom code.

I have yet to do it manually even once, yet I have recommended it to others many times. I’m not sure a tool would make me want to do it more, but ‘doing’ is not what I do. ‘Changing’ is what I do. That’s how I’m wired and I’m fine with that, but it doesn’t mean the ideas aren’t good or helpful for production workers who are more comfortable creating content in a structured environment.

It’s not that I don’t do stuff. I do practically whatever anyone tells me to do. I guess it would make more sense to put that line in context. I once worked in a corporate department where my boss used an analogy about us being the rudder and ‘ops’ being the engine. I had very little ‘corporate’ experience prior to working there and had never worked as a business analyst before. (I am very thankful for the opportunity as I feel it was one of the best jobs I ever had.)

As a result of my intial ignorance of how to be a business analyst, I wasn’t aware that other people had a similar or different opinion on the subject of how organizations should be organized. I only knew of it as ‘how my boss thought’. It wasn’t until after I visited the “Indianapolis Leadership Circle” (formerly known as the Leadership Mastery Group) put on by Tony Piazza that I heard something similar from the speaker, Scotty Bevill. He said (paraphrased for convenience):

[Project managers] don’t like to run things – we like to build, change, and refine things. That’s just who we are as people.

I use that word “people” specifically as Scotty was very adamant about business being “people dealing with people” and that we shouldn’t try to take the “human” out of who we are. The people in the room at the leadership meeting were mostly project managers who were mostly former IT workers. The other people in the room were current IT workers (such as myself, who is currently an IT Specialist in my day job). This is more of a belief about who we are as workers, not as much about the willingness to do or not do work. People like us (project managers and business analysts) prefer to be change agents, not production workers.

Permission to speak freely? Okay, for a second here I’m going to throw out all preconceived notions of what I should or should not do, what I am or am not capable of, and what does or does not make business sense. I’m just going to say what I think I want to do and then step back to see what sticks. As Scotty Bevill says, “Start with what is known.” Here’s what I know: I have found a way to add a sales funnel dimension to keyword research. Let’s call these “buyer keywords”.

Compendium, a business blogging platform which recently got purchased by Oracle, has 3 steps to create content which are 1) Research 2) Organize and 3) Create. I’d like to create a service that does 1) SEO Keyword and Competition Research 2) Creates and Manages Content and 3) does A/B Optimization.

Update: Since writing this I’ve since discovered something called a “Content Repository“. There are several types, but what they all have in common is a clear separation between the content and the presentation of the content. What I’m still looking out for (and willing to provide as a service until software can be built around it) is a way to track all content like a database and know when and/or how often it’s been linked out via social media or to certain social bookmarking sites and whether or not it’s been repurposed to a pre-defined selection such as Youtube, Soundcloud, or Podcast.

So when you take what I consider to be my ‘flux capacitor moment’ where I realized I had this ‘super power’ to attract customers to me by writing what matters to the customer and add in what I’ve since learned about content marketing, customer acquisition systems, and customer development I’ve got a knowledge base that is poised to be leveraged with the right content management system. By system I mean the methods (processes + tools) that can multiply the efforts of a content marketer by first finding out who is already seeking their product and writing directly to that person.

I’m not sure how to do this, but those are my collection of ideas.