I work 8-5 and do IT support and web design nights and weekends. My wife sells essential oils and makes soap for Skinny Coconut Oil. We have 5 kids. I go to church 2 times a week. I have an hour commute.

There’s just not a whole lot going on.

I’m underutilized. There are whole evenings where no one has any work for me to do. There are no meetings to attend. I spend entire Saturdays and entire Sunday afternoons with no work requests. So what do I do?

I rest. I meet with friends. I read articles on the Internet. I make videos. I tweet. I update my website. I go for a walk. There is still more time. There is a ton of time. I take the kids to the park. I read to them. Still more time.

There have been times in my life where I’ve felt overwhelmed or underwater. But even in these times, with a little bit of diligence and perspective, the short periods were not as bad as I originally thought. It was okay.

In January of 2012 I wrote, Problem Solver Seeks More Things to Fix, which I later regretted when hard problems began to present themselves (be careful what you ask for). But that’s essentially what I’m doing now.

The world is apparently changing exponentially, but the news seems slower than ever. We are living in amazing times, so why do I feel bored? Why do I just want to throw rocks in the creek and climb a hill?

Do I need more purpose in my life? Do I need more goals? How do I determine success? What do I want? Maybe I’m being too introspective and I’m asking the wrong questions. Maybe I should look outward more.

Who can I help more? How can I start thinking more about other people’s needs, rather than my own? How can I seek to add more value to the world than the value I take from it? What I can I do to get started?

I don’t know how I’m going to get there, but I’m going to document the process so you can follow along with me. I’ve heard that if I ‘take massive action’ or even if I ‘work a little bit every day’ I’ll get there. We’ll see.

But something worse returned.

Bare ground, like power, abhors a vacuum. There is always a nefarious weed seed ready to grow in place of the previous grass. But unlike grass, weeds grow at a faster rate, and in weirder directions. 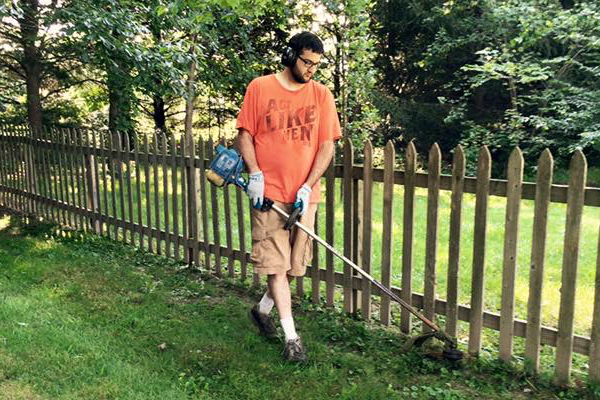 Instead of simply trimming the grass, now I had to trim the tops and sides of the crazy-haired weeds. They too would have to die. But there was nothing I could do to kill them. It was me who had to change.

Zen masters who trim bonsai trees seek, “a kind of oneness with nature and with the universe” and they used it as a discipline to aid enlightenment. Trimming bonsai trees was also used as a means to meditate.

When you’re out weedeating you have a lot of time to think. This time can be used to appreciate nature and practice an attitude of gratitude or it can be used to be vengeful and hate your life. I’ve done both.

Thomas Campbell, physicist, author, and expert on consciousness, believes love is the opposite of fear and love lowers entropy while fear increases entropy. 1 John 4:18 says, “perfect love drives out fear.”

When we decide to love what we are doing and change our attitude about work, we reduce entropy and help bring harmony to our lives and the lives around us. In this, I’m reminded of this poem from 1100 A.D.:

When I was a young man, I wanted to change the world.
I found it was difficult to change the world, so I tried to change my nation.
When I found I couldn’t change the nation, I began to focus on my town.
I couldn’t change the town and as an older man, I tried to change my family.
Now, as an old man, I realize the only thing I can change is myself,
and suddenly I realize that if long ago I had changed myself,
I could have made an impact on my family.
My family and I could have made an impact on our town.
Their impact could have changed the nation and
I could indeed have changed the world.”
by Unknown Monk, 1100 A.D.

One of the words I kept hearing over and over in 2013 was “mindset”. Mindset is kind of the new hip way to describe what our elders used to call “attitude“.

A mindset can be positive or negative, just like an attitude. A positive mindset is about overcoming limiting thoughts and having an abundance mentality.

When you start to reprogram your mindset to a more abundant mentality, you stop seeing problems and start to see how your limiting beliefs that are getting in the way.

Pat Flynn, a leading business leader said, “One of [the common themes that millionaires have] is that they don’t have that fear. They train themselves to be excellent ‘receivers,’ to be open and willing to receive massive amounts of money, which for some reason a lot of people are scared of. I know I kind of went through the same thing. I could feel myself sabotaging myself…not taking it to the next level when I totally knew that I could have. I think the whole mindset thing is so important.”

Dane Maxwell continues, “There are a lot of things that you can logically explain, but for whatever reason you can’t seem to make it happen. You’ve got a limiting belief, you’ve got something you’re stuck with, you’ve got a road block and you’re not going to be successful until you get that thing reversed. And unless you have a kind enough, compassionate enough, gentle enough teacher that without judgment will help you reverse that, you’re not going to move forward.”

You have a finite amount of mental energy so what you choose to spend it on matters. In business you might call this an opportunity cost because thought spent in one direction could prevent you from spending thought in another direction. What you think about is incredibly important because it influences everything else in your life.

There is a war going on in your mind. What are you doing to win? Are you moving towards success or are you self-sabotaging? “The Power of 1%” says that, “Just 1% [improvement] per day…has a dramatic effect and will make us 37x better, not 365% (3.65x) better at the end of the year.”

I started writing this post on September 6, 2013. Almost 2 years later I’m just now completing it. What stories have you started that need completing? Let’s complete more stuff, 1 day at a time. A year from now we’ll be 37x to 3800% better. 🙂